As
of early January, 2011, some videos that YouTube and our content
partners would like to monetize will not be playable using the
ActionScript 2 chromeless player because it does not have the ability to
show ads. If you attempt to play back such a video, an onError event will be fired, as documented
in the ActionScript 2 Player APIs reference guide. As a developer, you
can handle this event and play an alternate video, or display an
explanatory message to your users.

When the first ball of this year’s Indian Premier League cricket season is bowled, fans across the planet will have a front row seat in the world’s biggest online sports stadium. Tonight the Deccan Chargers and Kolkata Knight Riders will face off in Mumbai at 8pm IST, and the YouTube global community will be able to tune in to the IPL’s YouTube Channel (www.youtube.com/ipl) for streaming and on-demand access to witness the start of what promises to be one of the most widely-distributed sporting events in history. Fans can watch matches, highlight videos, player interviews and much more all on the IPL’s YouTube channel. 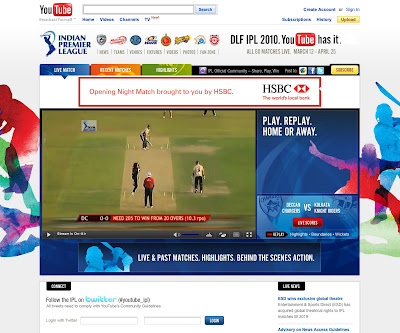 Named by Forbes as the “hottest sports league in the world” with revenues comparable to the world’s most popular leagues, the IPL season is a 60-match, 43-day tournament that features some of the best talent in cricket today. You can come to YouTube and keep up with the action any time, anywhere and connect with fans across the globe. Watch as the match happens, or if you missed a match, tune in later to see what happened. The entire season will be streamed around the world on YouTube, except in the US, where matches will be time-delayed and made available 15 minutes after the match ends.

And for all of you who want to cheer or commiserate with others, check out our Twitter gadget on the channel page to be part of the conversation. You can keep up with the discussion on Twitter with the YouTube IPL hashtag (#youtube_ipl). Share, rate and comment on videos throughout the channel, or upload your own video responses to the action. There’s also a link so you can join the Official DLF IPL community on Orkut (www.orkut.com/ipl).

We’ll be watching the donkey drops, the five-fers, the flippers and floaters, the half-yorkers and slow sweeps — and cheering alongside you!

* A googly is a kind of pitch similar to a baseball pitch or a bowling throw in the game cricket; a wicked googly would be a really good pitch.