Yahoo has recently quoted a study of the Fraunhofer Institute which concluded that Yahoo Mail and Hotmail have better spam filters than Gmail.

If the results are accurate, then either Gmail’s spam detection technology is no longer state of the art or Yahoo and Microsoft have dramatically improved their spam filters. Last time I checked, most of the messages from the inbox of my Hotmail account were spam. 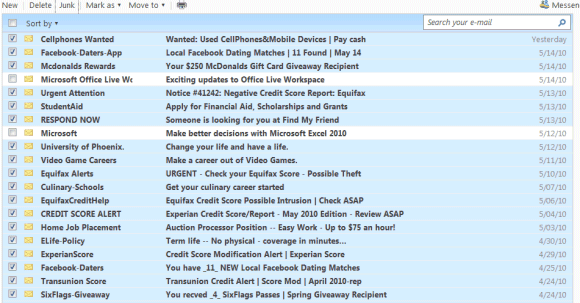 John Mueller, from Google, says that Gmail’s spam filter is quite effective: “When I first got my Gmail account (it seems like such a long time ago), I purposely signed up to all kinds of mailing lists to try out the filter. It seemed like a fun idea — but then I noticed that I actually wanted to keep my Gmail account :). About one spammy message comes through each month, but the most important part is that I haven’t lost anything that I was waiting for.”

I rarely get spam messages that aren’t flagged by Gmail, but the spam filter is not perfect. Sometimes Gmail flags legitimate messages as spam, so the algorithms are too aggressive.

What do you think? Is Gmail worse than Yahoo Mail or Hotmail when it comes to filtering spam?

Update: Here’s Fraunhofer’s press release with a link to the study. Unfortunately, it’s in German. (Thanks, Lazlo.)

Yahoo concluded that “independent empirical studies done by the prestigious Fraunhofer Institute show that Yahoo! Mail is #1 in blocking malware and spam from reaching mailboxes. It’s official. No one fights spam harder, smarter, or better than Yahoo! Mail.” But so is Gmail, according to Fraunhofer’s irrelevant study.