Stephen Hood, a former Yahoo employee, says that Yahoo developed an interface similar to Google Instant 5 years ago. It was called LiveSearch and it was launched as an experimental interface for AllTheWeb.com. 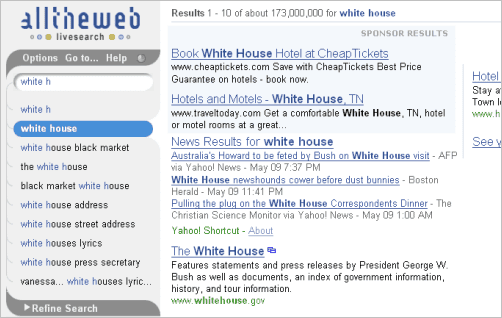 Yahoo would not let us ship LiveSearch on yahoo.com or as a part of Yahoo’s search engine. Instead we were only allowed to launch it on AllTheWeb, a smaller, lower-traffic search engine that Yahoo had acquired years earlier and largely left to atrophy. (…)

You have to remember that, at the time, Yahoo’s search business was doing just well enough that there was very little institutional appetite for product risk. As a result, “big” or disruptive ideas were too often left to whither on the vine. By focusing on the local maximum, Yahoo unwittingly traded innovation for incremental optimization.

LiveSearch was thus relegated to a tiny test bucket of users who didn’t actually use Yahoo’s search product (or any modern search engine). Usage data from this flawed test was used to internally evaluate its success in comparison to the model it was actually trying to disrupt. Lacking high-level support for its larger vision and starved for resources, LiveSearch was understandably put out to pasture.

Here’s an excerpt from Yahoo’s blog post that announced LiveSearch:

“Livesearch has that uncanny knack of figuring out exactly what is on my mind. As soon as I start to type a query, Livesearch suggests the right query and shows me the results page before I even press a search button. For example, I wanted to look for ‘mission impossible 3’. Just as I finished typing ‘mission’, Livesearch is already recommending ‘mission impossible 3’ as the search, and then instantaneously shows me the results page.”

Stephen thinks that Google “still has the organizational courage to challenge its own preconceptions” and that’s the reason why it can launch features like Google Instant, which change “a user interaction model that’s been largely unchallenged for years”.