Last weekend, Spain won the 2010 World Cup. For the month leading up to the final, Googlers joined the world in cheering for their favorite teams. Around our campus, games were watched on computer screens and on cafe video screens. Code went unwritten. Emails went unanswered.

Throughout the world, real life also slowed during World Cup matches. Which teams had the most loyal fans? Which game captured the attention of world the most? To answer these questions, we looked at counts of queries using Google. People search using Google day and night—except for football fans when a game is on.

These graphs show the volume of Google queries for some of the World Cup matches: 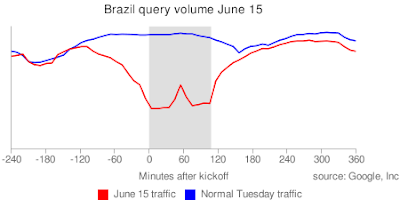 On June 15, as Brazil played its first game against North Korea, the volume of queries from Brazil, shown using a red line, plummeted when the match began, spiked during halftime, fell again and then quickly rose after the match finished. 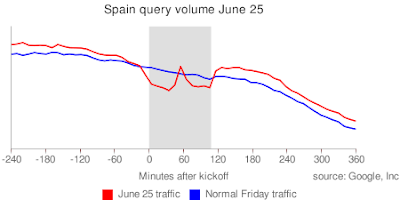 Queries from Spain during its June 25 game against Chile also decreased during the game, except during halftime. After some post-game querying, Spaniards went to sleep and queries dropped again.

To measure which country has the most loyal fans, we computed the proportional drop in queries during each of its team’s matches compared with normal query volume. Brazil topped the charts with queries from that country dropping by half during its football games. Football powerhouse and third-place winner Germany came in second, followed by the Netherlands and South Korea. 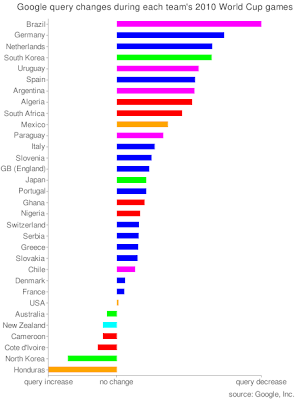 In fourth place, South Koreans were remarkably loyal even though some games began at 3:30am Seoul time. Japan, Australia and New Zealand, also affected by time-zone differences, expressed much less interest. A few countries searched more, not less. But only Honduras and North Korea increased significantly.

During the knockout rounds, each match’s losing team is eliminated from the tournament. As fewer and fewer teams remain, we expected increased worldwide interest in each remaining game. Unsurprisingly, worldwide queries slowed the most during the final game between the Netherlands and Spain, but the round-of-16 Germany v. England game had the second largest query decrease. Semi-finals and quarter-finals were all popular except for semi-final Uruguay v. Netherlands, during which queries actually increased. 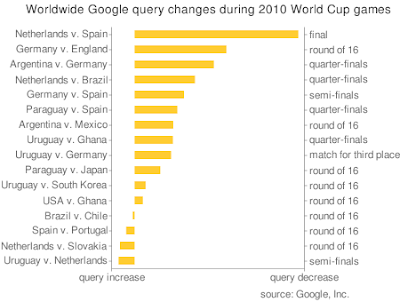 In Latin American countries, search volume dropped more steeply leading into and out of matches while, in Europe, searches ramped down and up more gradually. Of course, for games that went into extra time and penalty shootouts the drops deepened the longer the match went on, including Paraguay v. Japan, Netherlands v. Spain, and Uruguay v. Ghana as seen here: 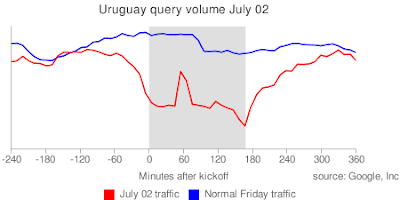 Finally, no blog post about the World Cup would be complete without a look at what did drive people to search—after the final match, of course. Although he won neither the Golden Boot (for the most World Cup goals) nor the Golden Ball (for best player) last weekend, Spain’s David Villa is winning in search compared to the recipients of those two honors—Germany’s Thomas Müller and Uruguay’s Diego Forlán—and Dutch midfielder Wesley Sneijder. All of these men competed for the Golden Boot with five goals apiece.

Similar to when Carlos Puyol headed in the single goal that put Spain in the final, people flocked to the web to search for information on Andres Iniesta, the “quiet man” who scored the one goal that led his country to its first World Cup championships. They were also interested in Dani Jarque, a Spanish footballer who died last fall and whose name was emblazoned on Iniesta’s undershirt, which he displayed after his goal. And after the match, searches for keeper Iker Casillas skyrocketed to a higher peak than any other popular footballer—including household names like Ronaldo, Villa and Messi—reached during the Cup. Sometimes, it seems, goalies get the last word.

We hope you enjoyed our series of posts on World Cup search trends and we’ll see you in Brazil in 2014!

If you’re a certain type of sports fan, you’ve been waiting four years to get to June 11, 2010—the kick-off of the World Cup and 30 days of football (soccer to some of us) madness, with 64 matches played by 32 teams from around the world.

As we’ve done before, we took a look at the search data using tools like Google Insights for Search—as well as some internal resources—to see what we could uncover about the upcoming tournament and its global audience. Search patterns can truly reflect the “pulse” of the world, and we found that the pulse of World Cup fever is beating strong as millions of fans hold tight to the hope that their team will make history as the 2010 champion.

It’s often said that football is a global sport, and that’s certainly true in search. Searches for [world cup 2010], [copa mundial] and [월드 컵] are all spiking, although overall World Cup buzz seems to be off to a slower start in 2010 than in the months leading up to the 2006 tournament, based on global trends for queries like [world cup] and [fifa world cup]. India is the #1 country searching for [fifa world cup schedule], [fifa 2010 schedule] and similar queries. And as the match-up between anglophone rivals England and USA approaches, searches for [england world cup] continue to far surpass interest in [usa world cup].

Most of us will be watching the matches on TV in pubs and living rooms, but a few lucky spectators will get to watch in person in South Africa. Searches for [world cup tickets] peaked in mid-April, and have since declined. But whether home or abroad, we’re all searching for the best way to show support for our team. Searches for [world cup decoration] have risen, and a glimpse at the Dutch shows queries for [oranje versiering] (“orange decoration”; orange is the Netherland’s national color) and [orange] have risen sharply for the last three months, as they have in 2006 and 2008 for the World Cup and European Cup.

All eyes—and hopes—are now hanging on the football stars who will be dribbling, passing and scoring for their countries. In search, the winning player is already clear: Cristiano Ronaldo, the Portuguese team captain and talented forward.

But many others are also being closely watched, especially the handful of players who have been injured in the days leading up to the start of the tournament. Queries on the Ivory Coast’s [drogba], England’s [rooney], Germany’s [ballack] and Italy’s [pirlo] have all spiked in this fashion. And the Netherlands is apparently far more concerned about Arjen Robben’s injury than their national elections. In the days leading up to the June 9 elections, between four and five times as many searches were done for [robben] than either of the two popular candidates [wilders] or [balkenende].

We’ll be back throughout the next month to highlight more search trends from the World Cup. In the meantime, you can explore trends on your own using Google Trends and Google Insights for Search, or see what topics other fans are discussing with the “Updates” mode and other search tools in the left panel of your Google search results page.