Google published a list of the fastest rising queries this year. The list doesn’t include queries that are always popular, since it tries to capture the spirit of 2010.

The fastest rising Google query was Chatroulette, the name of “a Russian based website that pairs random strangers from around the world together for webcam-based conversations”. It was followed by iPad, Justin Bieber, Nicki Minaj, Friv (a popular online gaming site), Myxer (a site that offers ringtones, wallpapers and apps for mobile devices), Katy Perry, Twitter, Gamezer (multiplayer games) and Facebook. As you can see, the fastest rising queries were related to social networks, mobile devices, games and music.

This graph only measures relative growth, not search volume:

If you go to Google Insights for Search, you’ll find different results. Most of the queries from the top 10 fastest rising searches are related to Facebook. 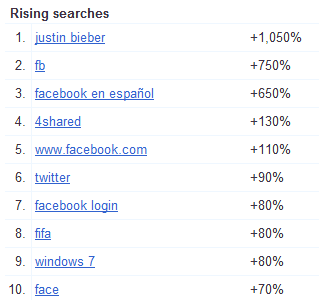 Google even uploaded a creative video that shows the most important events from 2010: