Picasa Web Albums was one of the few Google apps that didn’t support encrypted connections. Now you can go to the secure version at https://picasaweb.google.com to make sure that no one can intercept your requests. This is especially helpful if you use an unsecured WiFi connection.

Google Chrome says that Picasa Web Albums includes some resources that are sent via HTTP, but these aren’t the usual suspects: images, CSS and JavaScript files. The culprit is an iframe used for loading ads. Internet Explorer shows a mixed content warning every time you visit a Picasa Web Albums page, which is really annoying. 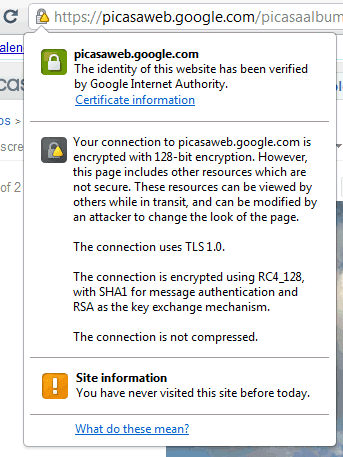