Google found an interesting solution for printing documents in Chrome OS. Instead of preloading the drivers for the most popular printers, Chrome OS will use an online service for printing: Google Cloud Print.

In Google Chrome OS, all applications are web apps. Therefore, in designing the printing experience for Google Chrome OS, we want to make sure printing from web apps is as natural as printing from traditional native apps is today. Additionally, with the proliferation of web-connected mobile devices such as those running Google Chrome OS and other mobile operating systems, we don’t believe it is feasible to build and maintain complex print subsystems and print drivers for each platform. In fact, even the print subsystems and drivers on existing PC operating systems leave a lot of room for improvement.

Our goal is to build a printing experience that enables any app (web, desktop, or mobile) on any device to print to any printer anywhere in the world. This goal is accomplished through the use of a cloud print service. Apps no longer rely on the local operating system (and drivers) to print. Instead, apps (whether they be a native desktop/mobile app or a web app) use Google Cloud Print to submit and manage print jobs. Google Cloud Print is then responsible for sending the print job to the appropriate printer, with the particular options the user selected, and providing job status to the app.

The only problem is that no printer supports Google Cloud Print and that’s why Google revealed some details about the service’s interfaces, hoping that printer manufacturers will update their software and support it. If a printer doesn’t support Google’s service, you’ll need a proxy software for the computer where the printer is installed. Google says that the proxy software will be bundled with Google Chrome.

Google wants to associate your printers with a Google account and manage them the same way as you manage Google Docs documents, so you can share them with other people. Web applications can use APIs to customize the printing options and change the user interface displayed when you start printing a document.

“We believe cloud printing has tremendous benefits for end users and for the industry and is essential, given the rapid shift toward cloud-based applications and data storage. We also believe that the only way that the benefits of cloud printing can be realized is if the protocols are open, freely implementable, and, when possible, based on existing industry standards. We expect there to be multiple cloud print services, and users should have a choice in which services they use and which printers they can connect to a service. Stay tuned for more details. We are confident that cloud-aware printers will soon be a reality,” suggests Google.

It may seem that Google’s solution is complicated and difficult to implement: we need an open standard for cloud printing, cloud-aware printers and users need to associate printers with an online service. Instead of sending the printing job directly to the printer, you’ll send it to the online service, which forwards it to the printer. Despite all these hurdles, Google Cloud Print allows you to print documents from a mobile phone, tablet, notebook or any other mobile device. You’ll be able to print files from an Android phone or tablet, from a Chrome OS computer, from any computer that runs Google Chrome and from other devices that will support Google Cloud Print.

Google acquired Plink, a small startup that developed Plink Art, an Android application that lets you identify paintings using your mobile phone’s camera. Plink Art was one of the winners of the Android Developer Challenge 2. You can find the application in Android’s market: just search for [Plink Art].

“The coolest feature of Plink Art is instant art identification. Just snap a photo and if the painting is in our database our visual search system will recognize it and tell you all about it. Currently Plink knows about tens of thousands of famous paintings,” explains Plink’s website.

I tried the application on my Nexus One by taking photos of Google Image Search results, but the results were terrible. Google Goggles found much better results for the same images. 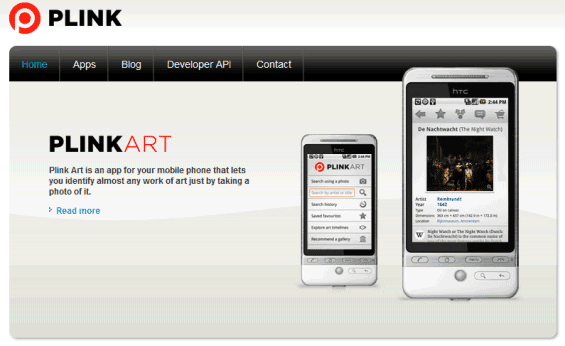 The two Plink co-founders and only employees will work to improve Google Goggles, a visual search tool that already lets you find books, places and artwork. From Plink’s blog:

“We started Plink to bring the power of visual search to everyone, and we’re delighted to be taking a big step towards that goal today. Google has already shown that it’s serious about investing in this space with Google Goggles, and for the Plink team the opportunity to take our algorithms to Google-scale was just too exciting to pass up. The visual search engines of today can do some pretty cool things, but they still have a long long way to go. We’re looking forward to helping the Goggles team build a visual search engine that works not just for paintings or book covers, but for everything you see around you. There are beautiful things to be done with computer vision – it’s going to be a lot of fun!”

A jQuery plugin for mobile web development on the iPhone, Android, Palm Pre, and other forward-thinking devices. what a plugin

Vlingo V1.03 is a Speech recognition application for Symbian S60 5th edition mobiles i.e. for Nokia 5800 XpressMusic and N97. Vlingo lets you control your mobile phone with voice. Speak to your phone to send a text or email message, call a friend, search the web, update your Facebook status and much more. 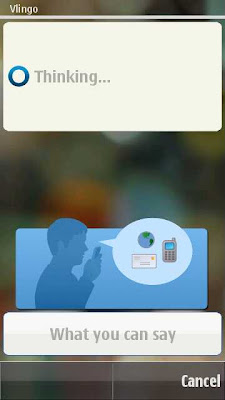 Vlingo uses your data network for speech recognition. This allows Vlingo to be more accurate and improve over time. The amount of data used is small, about 1 MB for every 150 times you speak to Vlingo. 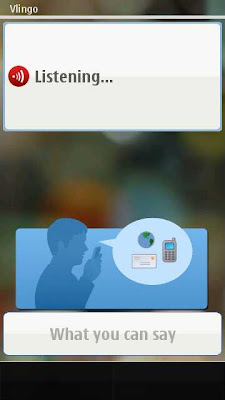 Do a lot just by speaking. With Vlingo you can- 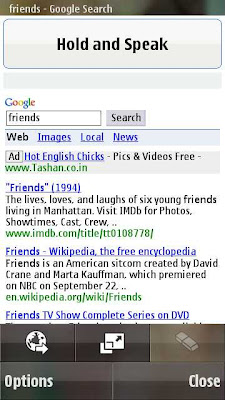 Vlingo provides flexible voice recognition. You can say anything to you think will get the task done. Here are some examples:

Vlingo provides you an option to change the language the Spoken Language. You can select from English (UK), English (US), Espanol (Espana), Deutsch, Italiano, English (Finland) and English (AU). Other the language, you can also choose Web Search Engine to either Google or Yahoo!

Vlingo application works really well. You just speak “Open Music” and it opens Music player on your mobile phone. You speak “Open Calander” and Calander is open for you. Very interesting and very usefulapplication for your Nokia 5800 or N97.