I have never tried installing Ubuntu on the Microsoft Virtual PC before, I did successfully on VM ware though. If you don’t know what Ubuntu is, please Google it, basically it is a Linux operating system with pretty desktop features. In the Thanksgiving holiday, I used my DELL Dimension 4600i (Windows XP sp3) to explore this option which turned out a good experiment, even Microsoft officially says its Virtual PC does not support Ubuntu.

The following is what I used to install Ubuntu.

In the New Virtual Machine Wizard of Virtual PC 2007, you would not see the Ubuntu from the supported Operation Systems list. Just select Other and click Next.

In the next screen, adjust the RAM to make at least 256MB for the memory and 4Gb disk space (I tried 2GB hard disk, but failed). Then you can create a new virtual hard disk file with dynamic assigned size, which means even you set 4GB as hard disk size but the physical size of your virtual hard disk file on your host OS will start from 1kb and grow dynamically when you put more stuffs. 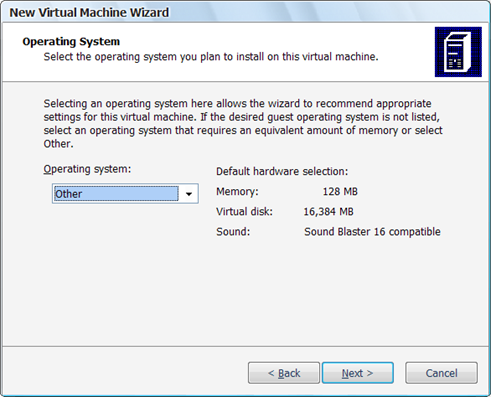 But for whatever reason if you see a strange screen says “Miss NCLR…” like I did the first couple times, hit DEL key at the boot screen to change the boot sequence in the CMOS setup. In my case, I put the CD ROM before the floppy disk then everything is fine.

For me, after that the Ubuntu installed went through without any issues. Except the installation time was a little long, and the virtual machine screen went into black a couple time. At the end, I could see the successful Ubuntu login screen, and the keyboard and mouse worked fine in the xWindow console. But the screen solution is only 800 x 600 and could not be changed.

Internet Tip: If you have any problems with the installation, can try this: When you see the Install Ubuntu menu, (make sure that it is highlighted) . Press F6 and then press esc again to close the menu, you will see a new line at the bottom that will say ‘Boot Options‘ at move your cursor, (with the arrows), to the end of the line. It should say something like “… quiet –“, delete that and replace it with “ noreplace-paravirt vga=791” and press enter to start the install. Then you install Ubuntu without problems.

I did not try, but if you want you can download the Virtual Machine Additions for Linux from Microsoft download web site  (http://www.microsoft.com/downloads/details.aspx?familyid=bf12642f-77dc-4d45-ae4e-e1b05e0a2674&displaylang=en). Not sure how much benefits you can gain, but it might resolve some virtual drivers issues, (like the video card one I mentioned earlier or the sound card issue – since I could not hear anything from my Ubuntu Virtual machine at this point).