Larry will now lead product development and technology strategy, his greatest strengths, and starting from April 4 he will take charge of our day-to-day operations as Google’s Chief Executive Officer. In this new role I know he will merge Google’s technology and business vision brilliantly. I am enormously proud of my last decade as CEO, and I am certain that the next 10 years under Larry will be even better! Larry, in my clear opinion, is ready to lead.

Sergey Brin’s new title will be Co-Founder and he will work on strategic projects, while Eric Schmidt will be the Executive Chairman. “I will focus wherever I can add the greatest value: externally, on the deals, partnerships, customers and broader business relationships, government outreach and technology thought leadership that are increasingly important given Google’s global reach; and internally as an advisor to Larry and Sergey,” explains Eric Schmidt, who became Google’s CEO in August 2001. 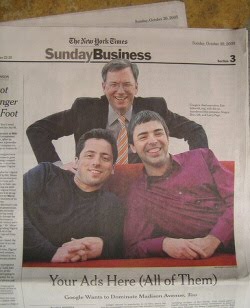 We run Google as a triumvirate. Sergey and I have worked closely together for the last eight years, five at Google. Eric, our CEO, joined Google three years ago. The three of us run the company collaboratively with Sergey and me as Presidents. The structure is unconventional, but we have worked successfully in this way.

To facilitate timely decisions, Eric, Sergey and I meet daily to update each other on the business and to focus our collaborative thinking on the most important and immediate issues. Decisions are often made by one of us, with the others being briefed later. This works because we have tremendous trust and respect for each other and we generally think alike. Because of our intense long term working relationship, we can often predict differences of opinion among the three of us. We know that when we disagree, the correct decision is far from obvious. For important decisions, we discuss the issue with a larger team appropriate to the task. Differences are resolved through discussion and analysis and by reaching consensus. Eric, Sergey and I run the company without any significant internal conflict, but with healthy debate. As different topics come up, we often delegate decision-making responsibility to one of us.

We hired Eric as a more experienced complement to Sergey and me to help us run the business. Eric was CTO of Sun Microsystems. He was also CEO of Novell and has a Ph.D. in computer science, a very unusual and important combination for Google given our scientific and technical culture. This partnership among the three of us has worked very well and we expect it to continue. The shared judgments and extra energy available from all three of us has significantly benefited Google.

It’s interesting to notice that today’s announcement sends Google back in time. 10 years ago, Larry Page was Google’s CEO and Eric Schmidt was the chairman. Now “day-to-day adult supervision [is] no longer needed.”