What happens with all the Google Wave gadgets, now that Google Wave has been discontinued? They’re available in Google Shared Spaces, a small Google Labs project that helps you collaborate with other people by adding information to a gadget. You can add placemarks to a map, draw on the same white board, play Sudoku, create lists, find the best budget accommodation, brainstorm, create diagrams and answer to polls.

“Google Shared Spaces allows you to easily create a space with a collaborative gadget and a chat box in it. The gadgets are based on the Wave gadgets technology, so there are already more than 50 gadgets across different categories, like games, productivity, and event planning. Anybody can create a new space by going to the gallery and clicking on one of the featured gadgets. Spaces can easily be shared by just pasting the URL into a chat window, an email or a content sharing platform like Google Buzz or Twitter. And if you know a little Javascript, it is easy to get started building your own real-time, collaborative gadgets and create new spaces based on those,” explains Google.

Maybe Google Wave would’ve been more successful if it didn’t have so many complicated features and ambitious goals. Google Wave could’ve been the back-end technology for many cool web apps, instead of trying to incorporate all the use cases in a single interface.

Google have always pursued innovative projects because we want to drive breakthroughs in computer science that dramatically improve our users’ lives. Last year at Google I/O, when we launched our developer preview of Google Wave, a web app for real time communication and collaboration, it set a high bar for what was possible in a web browser. We showed character-by-character live typing, and the ability to drag-and-drop files from the desktop, even “playback” the history of changes—all within a browser. Developers in the audience stood and cheered. Some even waved their laptops.

We were equally jazzed about Google Wave internally, even though we weren’t quite sure how users would respond to this radically different kind of communication. The use cases we’ve seen show the power of this technology: sharing images and other media in real time; improving spell-checking by understanding not just an individual word, but also the context of each word; and enabling third-party developers to build new tools like consumer gadgets for travel, or robots to check code.

But despite these wins, and numerous loyal fans, Wave has not seen the user adoption we would have liked. We don’t plan to continue developing Wave as a standalone product, but we will maintain the site at least through the end of the year and extend the technology for use in other Google projects. The central parts of the code, as well as the protocols that have driven many of Wave’s innovations, like drag-and-drop and character-by-character live typing, are already available as open source, so customers and partners can continue the innovation we began. In addition, we will work on tools so that users can easily “liberate” their content from Wave.

Wave has taught us a lot, and we are proud of the team for the ways in which they have pushed the boundaries of computer science. We are excited about what they will develop next as we continue to create innovations with the potential to advance technology and the wider web.

Last week, we opened sign-ups for Google Wave to everyone as part of Google Labs and made it available for all Google Apps domains. Here is the quick (seven minute) update on the state of the product from this year’s Google IO conference:

Today, it’s been a full year since the Wave team first got on stage at the Moscone Center and demoed a new vision for communication and collaboration to a crowd of developers. In a guest article on the Huffington Post last week, Lars described innovation and working on Google Wave as a rollercoaster—and this year has certainly been a fascinating ride. For the past year, I’ve had the pleasure and the challenge of explaining why this new technology is useful. Unlike some other products that I have also been lucky enough to work on, Wave is not a more advanced approach to a known application like webmail or the browser. It’s actually a new category, which can be kind of hard to wrap your head around.

I work in Wave every day, and we have identified a number of clear use cases for getting things done in groups at businesses and at schools. But people also ask me how I use Wave outside of work to understand how they should start using it themselves. As it turns out, the ways I use Wave aren’t revolutionary or groundbreaking—I communicate about everyday things, but it is these incredibly ordinary and important communications that are transformed in unexpected ways when you use Wave.

I wave with my family—with my mom, who is across the country, and with my sister who is a graduate student. We’re all on different schedules and very rarely all online at the same time. In one wave, we decided what to wear for a friend’s wedding—adding suggestions for each other with links and pictures, updating the wave as we had side conversations and made decisions. My mom and I chatted about my dress choice when we were both online, and then my sister was easily able to catch up later, adding her ideas. It kept all three of us up to speed in one place, rather than having several phone conversations, emails and chats. Sharing these small personal projects in a wave removes the little bits of friction to make the discussions more dynamic and productive. 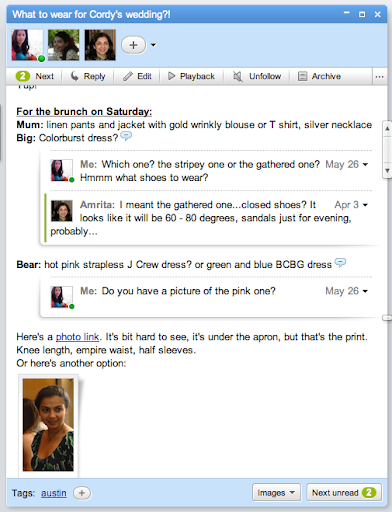 From talking to other people who use Google Wave, I know I’m not alone. I’ve been struck by the really personal nature of communicating and working together in Wave, and the emotional response people have to their first uniquely wavey experience, what we call the “Wave a-ha moment.” For many people it’s the live typing that does it; for others it’s the first time they create an in-line reply, embed a YouTube video or edit someone else’s text.

You really do have to try it to believe it, though—so if you checked out Google Wave six months ago and found yourself at a bit of a loss, take another look. The product is much faster and more stable and we have templates and tutorials to help you get started. Next time you find yourself taking notes while you are on the phone, do it in a wave and add your colleagues, or pull a couple friends or family members onto a wave for a small project… like going to the movies.

So head to wave.google.com and sign in. You can get more updates on our blog and even share your stories (ordinary or otherwise) with wave.stories@googlewave.com.

At the Google I/O developer conference, Lars Rasmussen announced that Google Wave no longer requires invitation. If you have a Google account, go to wave.google.com and you can use Google’s real-time communication service.

Google Wave is now available in Google Apps, so that businesses, universities and other organizations can improve communication flow.

“Anyone on a wave can edit or reply to any section, keeping discussion in context with relevant content. Everyone’s typing shows up instantly, and Google Wave lets new participants get up to speed quickly with organized discussions and playback to see how a wave evolved.”

Google Wave is a new web application designed to make groups of people more productive when communicating and working together. In Google Wave, everything takes place in flexible, hosted conversations known as waves. Waves are shared spaces on the web that update live as you type and support rich media and real-time gadgets.
Today, Google Apps admins can give their users access to the Google Wave preview through Apps. Domain administrators can turn Google Wave through the control panel and users can sign in at http://wave.google.com/a/[yourdomain.com].

How to access what’s new:
Administrators can enable Google Wave for your domain from the administrator control panel by clicking on ‘Add more services’.

To enable the preview of Google Wave:
1) Click “Add it now”
2) Confirm that you would like to enable Google Wave
3) Visit the ‘Settings’ tab to specify domain access controls and email notification defaults
4) Sign in to Google Wave at http://wave.google.com/a/yourdomain

Note: In ‘Domain Settings’, make sure that the checkbox ‘Enable pre-release features’ is also enabled. Google Wave for Google Apps is currently a Labs service and is not supported by the Google Apps Support team.

Remember Google Wavee No, not Google Buzz — Wave, that other social information pump that Google launched last year. It’s hard to blame you if you don’t. While Google’s goals are ambitious with Wave, many users couldn’t figure out what to do with it, or why they needed it in their lives. Perhaps more importantly, it was basically impossible to know if someone was talking to you in Wave unless you had it open all the time. Not anymore.

to alert you about new and updated waves. From the Inbox menu, simply select the new “Notifications” option to set how often (if at all) you’d like to receive them. The Wave team recommends that if you’re not a heavy user of Wave, you should get notified “immediately” upon a change. For more active users, the team seems to have a smart approach:

When you’re added to a new wave, or a wave that you are on changes, we’ll send you an email with a short summary of the text and links to go straight to your updated waves. Rest assured, we know waves can change a lot, so we will only send you one notification about a changed wave until you have logged in to look at it (i.e.: if a wave changes 10 times after we send the first notification, we won’t send 10 more emails). Waves you have open also won’t trigger updates.

While Google Wave and Buzz are completely different, they do share some similarities, and are fundamentally about Google pushing newer, more social ways to communicate. Of course, with Wave, Google didn’t shove it into the massively-used Gmail, so it seems that Wave hasn’t been able to gain the footing that Buzz has — even though Buzz arguably needs more work than Wave right now. As of December, Wave had sent out a million invites, but there are probably several times more people already using Buzz — again, just because of the Gmail thing.

The Wave team notes that this feature is still a work in progress and that there are some bugs (the ones listed don’t seem major).

Google recently started to release Google Wave. During their demo video a few months ago, they tried to show the iPhone web app but it wouldn’t work. Engadget recently made a video showing a little bit of the app. Here’s the video.