Google’s wallpaper feature is now available internationally and Google tries to convince people to change the background using a trick. Google’s homepages in France, UK, Canada and many other countries have a default background image.

Marissa Mayer, from Google, explains why Google’s homepage no longer has background image today: “To provide you with an extra bit of inspiration, we’ve collaborated with several well-known artists, sculptors and photographers to create a gallery of background images you can use to personalize your Google homepage. Included in the collection are photographs of the works of Dale Chihuly, Jeff Koons, Tom Otterness, Polly Apfelbaum, Kengo Kuma (隈研吾), Kwon, Ki-soo (권기수) and Tord Boontje, as well as some incredible photos from Yann Arthus-Bertrand and National Geographic. We’ll be featuring these images as backgrounds on the Google homepage over the next 24 hours.”

The only option displayed is “Change background image”, which requires to login using a Google account and lets you pick a background image. If you don’t like the wallpaper chosen by Google, you’ll use the option to customize it. 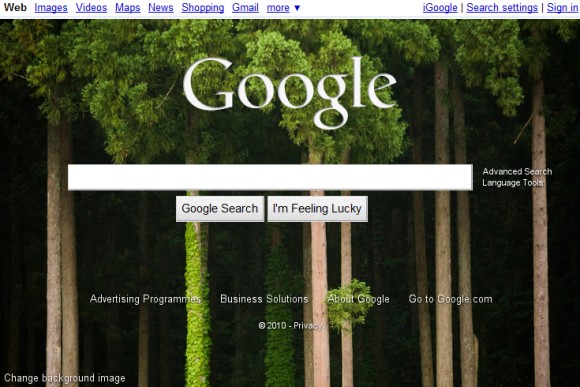 That’s quite clever, but Google didn’t consider that some users don’t like to see a background image. If you pick an image and select “Remove background image”, Google shows one of the default wallpapers. Fortunately, the promotion only lasts a day.

What you can do is to pick a background image, wait until tomorrow when Google’s classic homepage will be available again or use Google SSL homepage, Google’s Firefox homepage, the Linux template and other similar interfaces. Another option is to use Opera, which is not supported by Google.

When you pick a background image, one of the options is a plain white background: 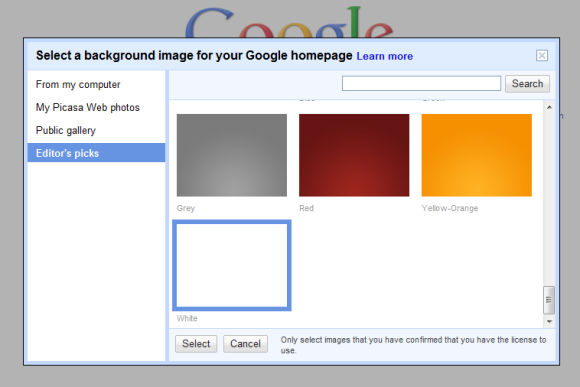 Update: Google’s promotion ended 10 hours earlier. “We had planned to run an explanation of the showcase alongside it—in the form of a link on our homepage. Due to a bug, the explanatory link did not appear for most users. As a result, many people thought we had permanently changed our homepage, so we decided to stop today’s series early,” explains Marissa Mayer.

Maybe Google should stop showing full-page doodles and games when you visit Google’s homepage. There are many subtle ways to promote a service or celebrate an event without annoying your users. For example, Google could show a game, an animation or a background image when you click on a doodle.