Uncharted 2: Among Thieves was the biggest video game of 2009. It sold more than 3.5 million copies worldwide, was identified by Metacritic as the most critically acclaimed game of the year, racked up more than 50 Game of the Year awards and set a new bar for artistry and storytelling in a video game. I spent more Saturday nights than I care to admit playing this game, so I was pretty excited when I found out that Robh Ruppel, Art Director at Naughty Dog Studios, used Google SketchUp to help design the game’s look and feel.

We sat down with Robh to hear how he used SketchUp to visualize Uncharted 2’s environments.

To hear more of our conversation with Robh and see some of his work, check out the Google SketchUp blog.

Google hosted its first Geo Teachers Institute, an intensive two-day workshop in which 150 educators received hands-on training and experience with Google Maps, Google SketchUp and Google Earth, including features like Mars, Moon and SkyMaps. Attendees from around the globe not only learned how these products work, but also discovered tips and resources for introducing these tools to students and using them to conceptualize, visualize, share and communicate about the world around them. Through this event, teachers were hopefully inspired to bring the world’s geographic information to students in compelling, fresh and fun ways. 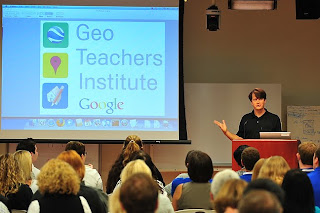 As part of our continued effort to collaborate with teachers and help students get a better sense of places across the globe, we also announced that Google Earth Pro is now available to educators for free through the Google Earth for Educators site. Educators from higher educational and academic institutions who demonstrate a need for the Pro features in their classrooms can now apply for single licenses for themselves or site licenses for their computer labs. A similar program exists for SketchUp Pro through the Google SketchUp Pro Statewide License Grant, which is currently being provided via grants to 11 states, and available to all others at the K-12 level at no cost.

In conjunction with these exciting Geo-related events and announcements, the Geo Education team also thought it’d be timely and fun to test Googlers’ geographic knowledge by hosting the company’s first ever Google Geo Bee. With help from National Geographic, 68 teams relived their school years and took a written geography exam, competing for a spot on stage with Alex Trebek, who hosted the main event. The competition was based on the group version of the National Geographic Bee for students, which Google has sponsored for the past two years. Questions included those like “Which country contains most of the Balkan Mountains, which mark the boundary between the historical regions of Thrace and Moesia?” and “Ben Nevis, the highest peak in the United Kingdom, is located in which mountain chain?” 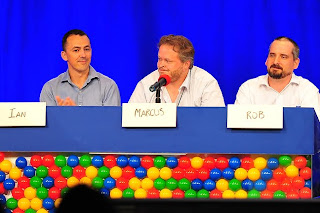 The final three Google teams (the Tea-Drinking Imperialists, the Geoids and the Titans) all showed off their geographic literacy and answered a plethora of diverse and complex questions. In the end, it was the Tea-Drinkers who emerged the winners when they figured out that Mecca was the answer to the clue, “Due to this city’s location on a desert trading route, many residents were merchants, the most famous of whom was born around A.D. 570.” And they didn’t just walk away with bragging rights; thanks to Sven Linblad from Linblad Expeditions, they also won an amazing adventure trip to either the Arctic, the Galapagos or Antarctica.

Through all of these education efforts — for teachers, students and grown-up Googlers alike — we hope people of all ages never stop exploring.

The first-ever Google Model Your Town Competition has entered the public voting phase. It’s now up to you to help decide which of the five finalist towns should be the overall winner. Cast your vote before May 1.

These five teams used Google SketchUp and Google Building Maker to create beautifully detailed 3D models of their communities — and now they’re viewable in Google Earth by everyone in the world. To see all of the towns who entered the competition, check out the Google 3D Warehouse collection.

The winning town will receive an event hosted by Google in their honor, US $10,000 for their local schools and more. Don’t forget to vote by May 1, and we’ll announce the winning town by May 15.

And if you’re interested in learning how you can model your town, check out our Your World in 3D website for examples and other tools to help you get started.