Did you know that Google has an Experimental Happiness team? One of the engineers that are part of this team is Othar Hansson, who is a tech lead for rich snippets and a member of Google’s Search UI Group.

Did you know that Google has a search czar? His name is Ben Gomes. “I think of Ben as our diplomat,” said Marissa Mayer, Google’s vice president of search products and user experience. “It’s Google; it’s search. There’s a lot of big personalities; there’s a lot of opinions, and Ben is the reasonable one that can help build the bridges. When we look back, there was a point where Larry and Sergey really felt like we needed to name a search czar. And there was only one natural choice — this was back in 2002 — and that was Ben.” According to Mercury News, “Gomes is responsible for shaping the automatic suggestions users get as they begin typing a query, and the few lines of text and links they get back, which Google calls [snippets]”.

Did you know that Google still has more engineers working on search than any other product? Johanna Wright says that “other initiatives, such as Google TV and Android, help move search beyond the desktop and laptop paradigm on to other hardware.” Johanna Wright is the “Director of Product Management responsible for Web Search. She oversees the development of Google’s search user interface and features and was the initial product lead on Universal Search.”

Marissa Mayer, Johanna Wright, Ben Gomes and Othar Hansson will speak next Wednesday at a special event about the evolution of Google search. Most likely, Google will also launch some new features and a new interface.

Google has recently started to test an interface that shows the results as you type the query. The new interface could be launched next week. Shark SEO says that the new UI is especially useful for long-tail searches. “From finding out the best way to deal with MySQL/PHP queries and finding the right Excel formulas, it was just astonishingly, brilliantly useful – it saved me time and led to me finding the right results much faster.” 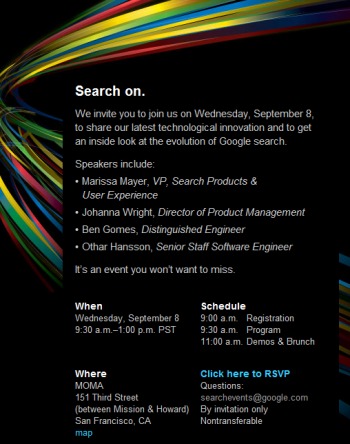