Here’s a subjective list of Google services that were launched or were significantly improved in 2010:

10. Google Scribe – a service that shows autocomplete suggestions as you type. It will probably become as popular as Google Suggest and Google Translate once its integrated with other services.

9. Voice Actions for Android – an application that lets you control your phone using your voice. You can call your contacts, send email, get directions, listen to music, write notes and go to a website.

7. Google Buzz – despite the initial privacy brouhaha, Google Buzz is the best Google service released in 2010. Even if it’s less than one year old, Buzz already has an impressive set of features, a powerful API, it’s integrated with many services and has a cool factor that’s missing from other Google social products. Unfortunately for Google, Buzz is not yet very popular.

2. Google Search has changed a lot this year and there were many user interface changes: from Google Instant to Instant Previews, from interactive doodles to custom backgrounds for the homepage, from vertical navigation menus to a consistent interface for most Google search services. Google also launched a completely new interface for image search that lets you explore more images and a new search index with real-time updates.

1. Android – two important releases (Froyo, Gingerbread), huge growth (from 1.4 million smartphones sold in the third quarter of 2009 to 20.5 million phones one year later – according to Gartner) and a lot of new devices, including tablets, TVs, consoles, media players and e-book readers. It’s probably the fastest growing product released by Google.

Google Scribe may not seem very useful, but it’s one of the features that could significantly improve virtual keyboards from mobile phones. Instead of showing suggestions from a dictionary, Google Scribe can provide contextually-relevant suggestions.

Scrybe is a free Android keyboard that uses Google Scribe to generate suggestions. It’s not developed by Google and it uses an unofficial Google Scribe API, but it’s an interesting application. 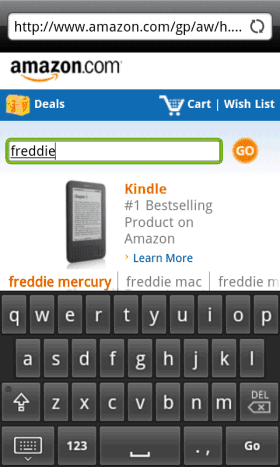 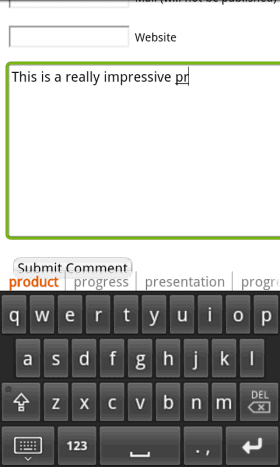 Scrybe needs to fix many issues to become really useful. If you delete some letters from word, Scrybe is not able to detect that you’re not writing a new word. Another problem is that you can’t type very fast because Scrybe tries to fetch the suggestions.

Reddit users think that SwiftKey has a better approach: it preloads the data, so there’s no lag. “So this is basically the same thing as SwiftKey, but offloaded to Google’s servers? Seems to work well, but no better (and slower) than SwiftKey,” says Podspi. SwiftKey is $3.99 and there’s a two-week trial.

Google developed a Chrome extension for Google Scribe, the text completion service launched earlier this week. By default, Google Scribe is disabled, but you can enable it by pressing Ctrl+J. You can also press Ctrl+Shift+J to switch to the on-demand mode that shows suggestions only when you press Tab. If you find Google Scribe useful or you use the on-demand mode, there’s an option to automatically activate the service for any text field. 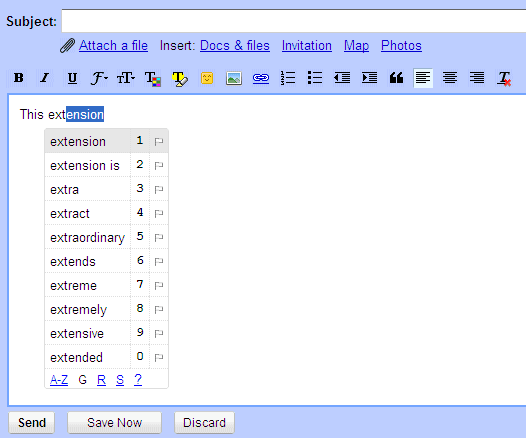 The extension doesn’t work well in Gmail if you use the editor’s plain text mode or Scribe’s on-demand mode. Another Google service that’s not compatible with Scribe is Google Docs, which uses a custom text editor.

For other browsers, you can add the bookmarklet from this page. The main difference is that you have to enable Scribe by clicking on the bookmarklet.

On an unrelated note, the screenshot above shows some new Gmail features that are tested internally at Google: inserting Google Docs files, photos and maps.

Google launched a very interesting tool that offers suggestions as you type: Google Scribe. It’s not exactly the service I anticipated 3 years ago, but Google Scribe works surprisingly well. For example, I started to type “This works sur” and Google suggested “This works surprisingly well“, which is exactly what I wanted to type. Instead of typing 14 characters, I could only type “1” or press Enter to select the first suggestion. 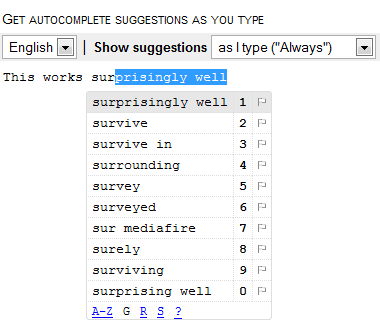 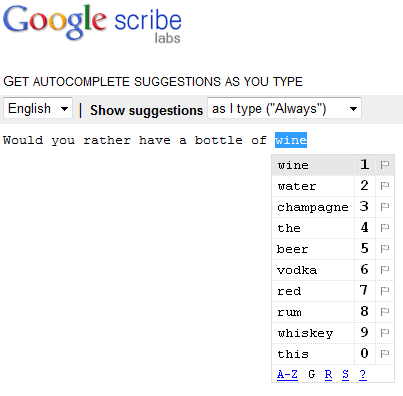 The nice thing about this service is that you don’t need to use Google’s editor. You can add a bookmarklet to your browser and use Google Scribe in Gmail, Blogger, or on any web page that includes text fields.

Google Scribe only works for English right now, but I’m sure that Google will add many other languages in the future. If you don’t like to see suggestions for all the words you type, enable the on-demand mode (Ctrl+Shift+J) and you’ll only see suggestions when you press Tab.

Since Google uses data extracted from web pages, you’ll see a lot of strange suggestions like this pattern from Google’s navigation bar: 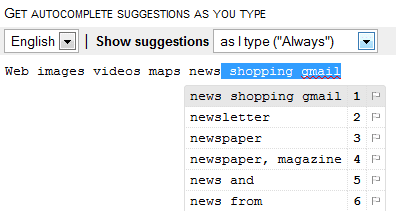 or this text, which is frequently used on IngentaConnect’s site: 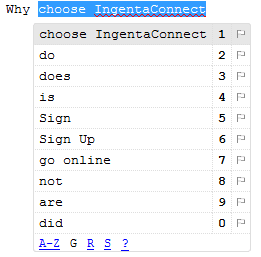