Google found a strange way to show to the world that Facebook is a walled garden that traps your data: by blocking Facebook’s access to the Google Contacts API. A Google spokesperson said that “users often aren’t aware that once they have imported their contacts into sites like Facebook they are effectively trapped. We hope that reciprocity will be an important step towards creating a world of true data liberation—and that this move will encourage other websites to allow users to automate the export of their contacts as well.”

Facebook users can still export their Gmail contacts and manually upload the file to Facebook, but Google Contacts API made this much easier. Facebook even found a direct URL that lets you export your contacts, so you don’t have to visit Gmail. 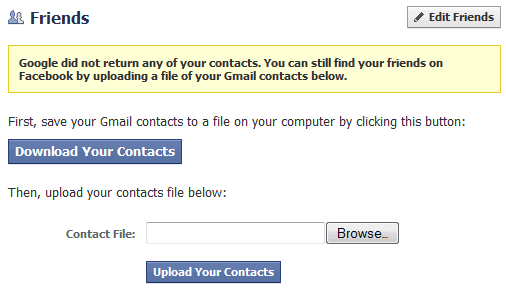 Google may have good intentions, but that’s a terrible way to treat users. After all, it’s their data and it should be their choice to use services like Facebook.

To show that Facebook is not the only target, Google Contacts API includes some new terms of use: “Google supports data portability. By accessing Content through the Contacts Data API or Portable Contacts API for use in your service or application, you are agreeing to enable your users to export their contacts data to other services or applications of their choice in a way that’s substantially as fast and easy as exporting such data from Google Contacts, subject to applicable laws.”

But that’s not always the case, since Facebook allows Yahoo and Microsoft to build services that import your Facebook friends, while Google can’t get that data. Danny concludes that “Facebook simply doesn’t want you to mass export them into Google — not unless, I suppose, it gets a business deal with Google. And if it doesn’t want to do a deal, then those emails don’t get to go. They aren’t yours. They belong to Facebook, and can only be exported to the business partners that Facebook agrees with.”

Update 2: Google redirects users that want to download their address book directly from Facebook to a page titled “Trap my data now“:

“Hold on a second. Are you super sure you want to import your contact information for your friends into a service that won’t let you get it out? Here’s the not-so-fine print. You have been directed to this page from a site that doesn’t allow you to re-export your data to other services, essentially locking up your contact data about your friends. So once you import your data there, you won’t be able to get it out. We think this is an important thing for you to know before you import your data there. Although we strongly disagree with this data protectionism, the choice is yours. Because, after all, you should have control over your data.” 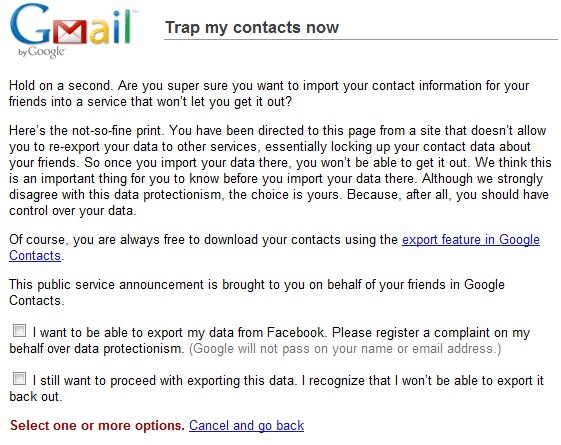