As previously promised, Google Nexus One’s site has been replaced by a gallery of Android phones. “The Google Phone Gallery features a selection of Android-powered phones currently available. All the phones in the gallery include Google Search, Android Market, and Google Mobile services such as Google Search, Gmail, and Google Maps,” explains Google.

You can restrict the phones to a carrier or manufacturer, compare them and buy the phones from third-party stores. The list is not comprehensive and the search box is not very useful. 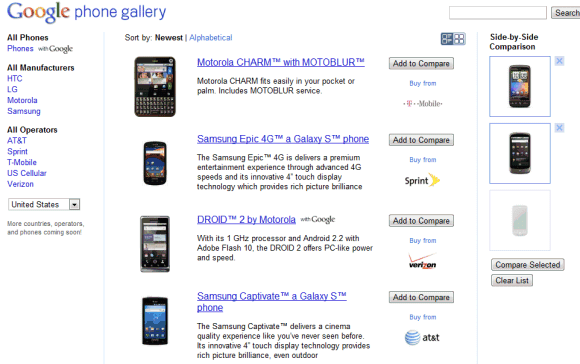 “Here at Google, we’re thrilled with the global adoption of Android and with the high quality of devices that are coming to market around the world. Since there are so many great phones, we wanted to make the selection process a little easier for people who are in the market for a new one. Google Phone Gallery [is] a showcase of Android-powered devices that deliver the best Google experience today,” says Google’s Ben Serridge.

Nexus One was a great reference Android phone better suited for developers and technology enthusiasts. Google’s branding didn’t help the phone because Google didn’t manage explain why the phone was special. Probably not many people cared that the phone was sold unlocked, it was easy to root, had a stock Android interface and it was updated by Google. Hopefully, Google will do a better job at showcasing other devices.