Google Maps 5 for Android comes with two features that make Google’s mapping software a lot more useful. Google now uses vector graphics instead of map tiles and it caches some of your most frequently used maps so that they are available offline.

Tilting: Drag down with two fingers to tilt the map. Tilt while zoomed in on one of the 100+ cities around the world with 3D buildings to see a skyline spring to life.

Rotating: Twist with two fingers to rotate the map. After tilting to see 3D buildings, rotate around them to gain a new perspective from any direction.

Smooth zooming: Slide two fingers together or apart, and see the map and labels continuously scale to any zoom level, stopping when your fingers stop.

Compass mode: Center the map on your location, and then tap the compass button in the top right corner. The map will flip into 3D mode and start rotating to match your perspective, while still keeping all the labels upright and readable. 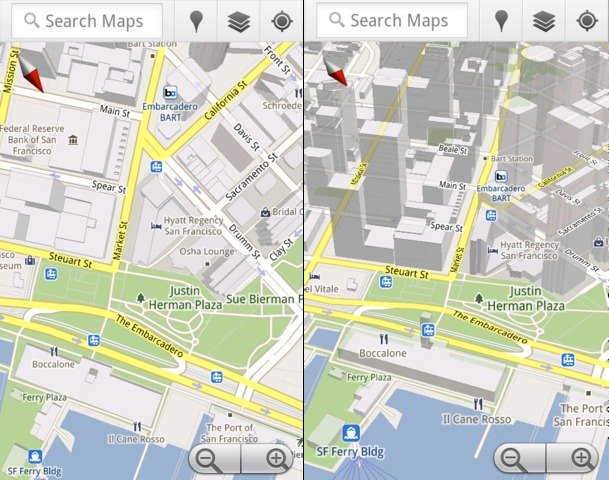 The new 3D view makes maps more intuitive and easier to use, but that’s not all. Since Google no longer has to download map images from its servers and vector-based maps require 100 times less data for all zoom levels, it’s feasible to cache data. “Rather than having a static set of maps when installed, Maps will automatically start caching the areas you visit the most when your device is plugged in and connected to WiFi (e.g., the nightly charge).” You can’t manually control caching, but it’s an important first step toward an offline Google Maps.

Google also promises to add offline rerouting to Google Maps Navigation. “You’ll still need a connection to start a route, but if you miss a turn along the way, we’ll quickly get you back on track, even if you don’t have an Internet connection.”