Gmail added a new Labs feature that parses your messages and lets you preview some content using web services. This time you can preview the addresses from a message using Google Maps. The addresses extracted by Gmail are displayed after a message and you can load a map preview without opening a new page. Right now, the feature only works for US addresses, but Google promises to address this issue. 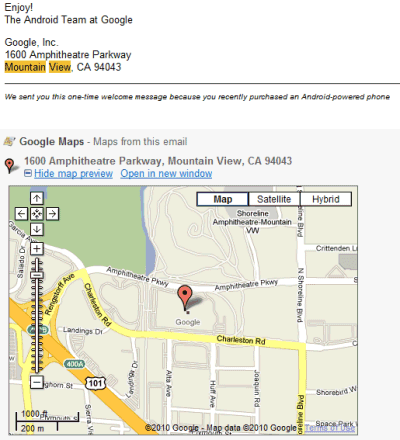 Gmail already displays addresses from messages in the right sidebar, but you need to click on a link to open the map in a new page. The new Gmail Labs feature has another advantage: it also previews links to Google Maps.

Gmail’s blog says that a map preview feature is now available for Google Buzz, but it only works when you paste a Google Maps link in a Buzz message. Unfortunately, Google’s thumbnails is really small and clicking on the thumbnail opens a static map.

To find the Labs feature, open Gmail Labs and use your browser’s find-on-page feature (Ctrl+F / Cmd-F) to search for “Google Maps previews”. Gmail Labs offers other similar contextual gadgets for previewing links to Flickr, Picasa Web, Yelp, Google Voice messages, Google Docs and the YouTube preview feature is enabled by default. Developers can create custom contextual gadgets for Gmail in Google Apps and hopefully the APIs will be extended to the regular Gmail app.