The native app is better because it shows more information about the locations of your friends and it sends you to the map view when you click on a friend, but the web app is just a layer in Google Maps and this makes a lot of sense. Google Latitude should not be a standalone app, it should integrate with Google Maps and Google Contacts, so you can quickly find your friends. 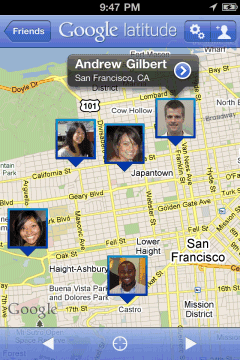 Marissa Mayer, Google’s VP of geographic and local services, has recently said that Google Latitude will add explicit check-ins, inspired by Foursquare. “Latitude is useful for a smaller group of people. Only a handful of people you’ll want to know where you are at all times. There will be new layers coming on top of it. It’s more useful when more people are on it. And implicit and explicit — yes, the check-in. Maybe that’s in Latitude or maybe it’s in Maps.”