Google started to filter search suggestions that include terms associated with copyright infringement like “torrent”, “bittorrent”, “rapidshare”, “megaupload”. It’s a slippery slope and Google’s suggestions will be less useful since they’ll no longer include many popular searches.

Last month, Google explained that this is one of the changes intended to address copyright infringement. “We will prevent terms that are closely associated with piracy from appearing in Autocomplete. While it’s hard to know for sure when search terms are being used to find infringing content, we’ll do our best to prevent Autocomplete from displaying the terms most frequently used for that purpose.”

Blacklisting keywords like “torrent” is a terrible way to prevent copyright infringement since users can always type queries without Google’s help. The main consequence is that Google will appear to be broken and users will no longer trust the suggestions because they’re censored. Last year, Google started to become politically correct by removing the suggestions for queries like [why are muslim]. There will always be complaints about the suggestions, but starting to arbitrarily blacklist keywords opens a can of worms and makes it easy to remove other controversial suggestions. As Mashable says, “this is a subtle form of censorship, and at first glance it seems trivial. However, even though the censorship is slight, it still indicates Google’s willingness to change its search protocols to satisfy the needs of a certain business group, in this case members of the entertainment industry.” 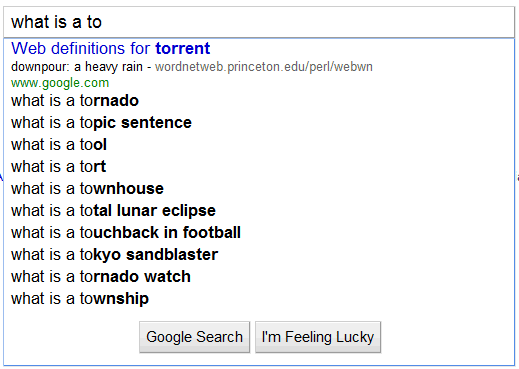