After Germany’s Federal Commissioner for Data Protection criticized Google for using Street View cars to scan wireless networks, Google posted a detailed answer that explains how Google collects data about WiFi networks to improve location based services like Google Maps for Mobile. Google says that collecting WiFi network information is not illegal and many other companies collect this data. 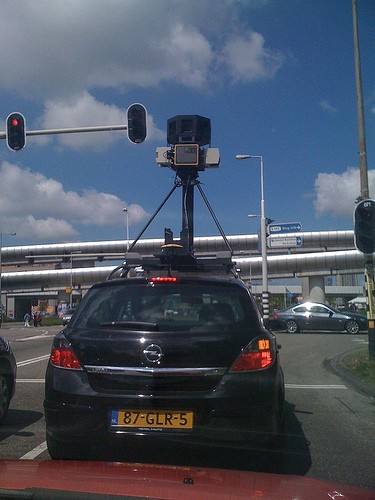 Visibly attached to the roof of each vehicle is a commercially available Maxrad BMMG24005 omnidirectional radio antenna. This antennae receives publicly broadcast wifi radio signals within range of the vehicle.

The vehicle travels at normal road speeds, and so spends only a very short amount of time within the range of any given wifi access point.

The signals are initially processed onboard in the car, using software including the standard Kismet open source application. The data is then further processed when transferred to servers within a Google Data Centre, and used to compile the Google location based services database.

The equipment within the vehicle operates passively, receiving signals broadcast to it but not actively seeking or initiating a communication with the access point.

The information visible to the equipment is that which is publicly broadcast over the radio network, using the 802.11 standard. This includes the 802.11 b/g/n protocols.

The equipment is able to receive data from all broadcast frames. This includes, from the header data, SSID and MAC addresses. (…) The equipment also separately records the signal strength and channel of the broadcast at the point at which it was received by our equipment, and is able to establish the protocol used (i.e. 802.11b/g/n).

Now that Motorola decided to replace Google’s location services for Android with Skyhook, Google needs to improve the accuracy of the results.