One of the reason why mobile app stores are successful is that applications are more discoverable. Users know where to find applications, there’s a consistent interface for ratings and reviews, an easy way to buy applications and to compare them.

For web applications there’s no web store and it’s not always easy to find a good web app. Since Google Chrome OS is an operating system designed for running web apps, it’s really important for Google to provide a list of high-quality web applications. Users may need an online photo editor, a music player, a chess game, a Math software or an online IDE.

Chrome Web Store will be launched later this year and intends to be “an open marketplace for web apps”. Users will be to “install” applications by adding a shortcut to the new tab page. When you “install” an application, it can integrate with the browser by using advanced features that require permission: local storage, user’s location, notifications. 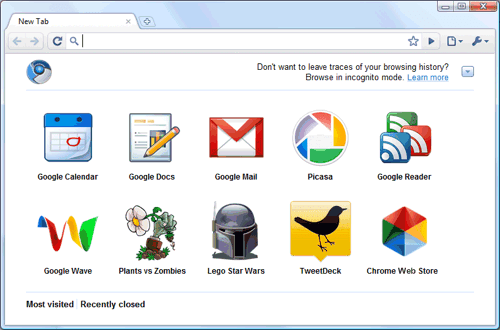 Update: You can already install applications in the latest Chromium builds. This post explains how to add the “enable-apps” flag and shows an example of application.