Google Chrome is the only popular browser that doesn’t have native support for feeds: it doesn’t detect or preview feeds and it doesn’t let you subscribe to feeds using your favorite feed reader. Most of these features are available in Firefox, Opera, Safari, Internet Explorer, but they’re implemented in Chrome using an extension.

Chrome’s RSS subscription extension was supposed to be bundled with the browser, but it was no longer included because not many people subscribe to feeds and the orange icon would’ve been distracting. A Google Chrome engineer offered a more detailed explanation:

“We originally intended to include RSS support by default as a native feature of Google Chrome (and we still might in the future) but we decided instead to implement this as an extension. This decision was made based on our philosophy of trying to limit ourselves to adding only the UI features that a vast majority of users need and allow each user to customize the browsers to fit their needs with Extensions. Given that most people are not familiar with and don’t consume RSS feeds, we thought that RSS support would be a better fit as an extension, at least to begin with.”

Here’s what you see when you click on a link to the Slashdot feed: 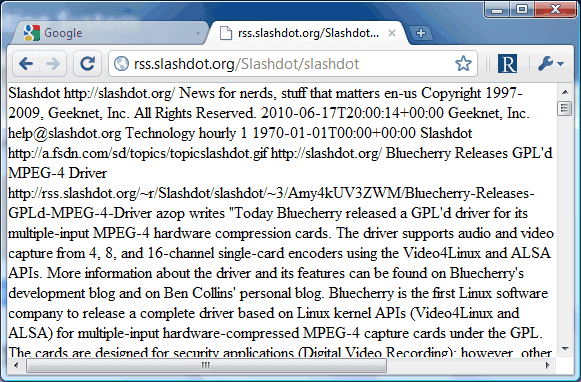 … and here’s the same feed if you use the RSS subscription extension: 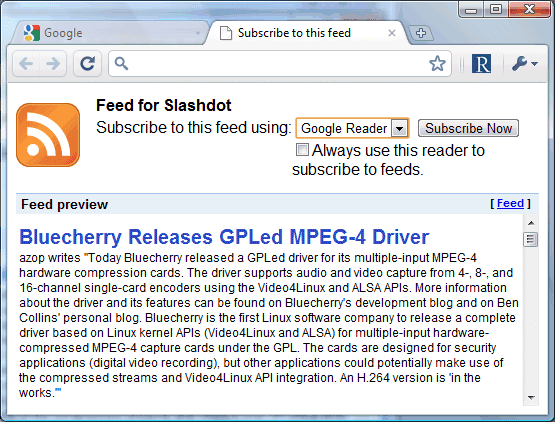 Maybe not all users know the definition of a feed, but not many people know what a browser is and that doesn’t stop them from using a browser. Orange icons for feeds are everywhere and many sites display them prominently.

It’s strange to see that Google Chrome doesn’t have native support for feeds, while Google Reader is the most popular online feed reader, Google’s FeedBurner is the most popular service for managing feeds, most Google search services have feeds for search results and even Chrome’s blog links to an Atom feed.

If you’d like to see native support for feeds in Google Chrome, star this issue.