Google announced that it has acquired Slide, a start-up that develops social apps. TechCrunch reports that Google paid $228 million for Slide, after investing in Zynga, one of Slide’s competitors.

“For Google, the web is about people, and we’re working to develop open, transparent and interesting (and fun!) ways to allow our users to take full advantage of how technology can bring them closer to friends and family and provide useful information just for them. Slide has already created compelling social experiences for tens of millions of people across many platforms, and we’ve already built strong social elements into products like Gmail, Docs, Blogger, Picasa and YouTube. As the Slide team joins Google, we’ll be investing even more to make Google services socially aware and expand these capabilities for our users across the web.”

It’s obvious that Google plans to launch a social service to compete with Facebook, but it’s not clear why it would buy a company that develops apps like SuperPoke, SuperPoke Pets or FunSpace. Maybe for Slide’s engineering talent, Slide’s valuable analytics data or maybe because it couldn’t buy Zynga. 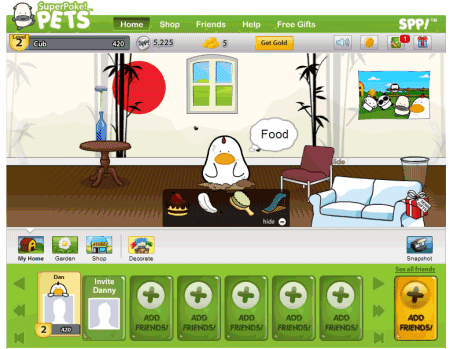 Social networks and online games account for about 33% of the time spent online in the US, according to a Nielsen study. Tom Chatfield, the author of Fun Inc: Why Games Are The 21st Century’s Most Serious Business, thinks that social games aren’t a fad: “People realised that a social platform like Facebook gives people ways to show off to, or compete with, their friends. It’s so much more engaging to do something with people you know than to do it with strangers. You can cheat if you’re playing online with strangers, but playing with friends is an incentive to be fair, and that brings the emotional rewards of competition.”

Since Facebook has the Internet’s main social graph and stores data about more than 500 million users, all the cool social apps integrate with Facebook. In the future, every web application will have a social component, which will probably powered by Facebook, a closed social network that traps user data.

OpenSocial is a Google project whose goal was to create social apps that work in any social network. FriendConnect was designed to transform any site in an OpenSocial container. Buzz is the epitome of openness, by embracing open standards and allowing anyone to access the firehose, which includes public activity from every Buzz user. Unfortunately, these projects haven’t been very successful, so Google will have to build a social network on top of OpenSocial, Google Buzz and Google Profiles. The project is crucial for the future of Google search, Google ads, Google’s web apps and maybe more than that.

“I can’t speak for the whole company, but I guess not embracing the social aspects [was Google’s biggest mistakes]. Facebook came along and has been very successful, and I may have dismissed that early on. There was this initial feeling of, ‘Well, this is about real, valid information, and Facebook is more about celebrity gossip or something.’ I think I missed the fact that there is real importance to having a social network and getting these recommendations from friends. I might have been too focused on getting the facts and figures—to answer a query such as ‘What digital camera should I buy?’ with the best reviews and facts, when some people might prefer to know ‘Oh, my friend Sally got that one; I’ll just get the same thing.’ Maybe something isn’t the right answer just because your friends like it, but there is something useful there, and that’s a factor we have to weigh in along with the others.”