Yet another Google app initially developed for Android makes its way onto the Apple App Store: Google Translate. It doesn’t have all the features of the Android app: there’s no conversation mode, no SMS translation, Google Suggest or a list of related phrases. Another issue is that the font size is way too big.

The application has a feature that’s not available in the Android app: full-screen mode, so it doesn’t make sense to use a such a big font size which is not even configurable. Google says that “the ability to easily enlarge the translated text to full-screen size” makes it “much easier to read the text on the screen, or show the translation to the person you are communicating with. Just tap on the zoom icon to quickly zoom in.” 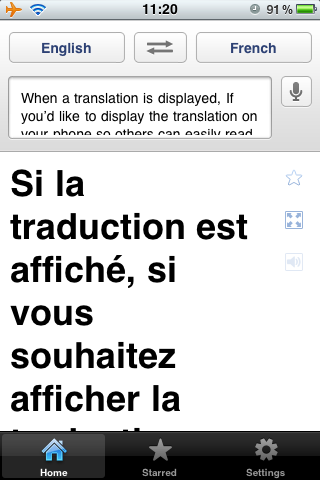