Greg Sterling spotted image ads in Gmail and this seems to be a controversial Gmail experiment. A Google spokesperson said that Google “recently started experimenting with image ads on messages with heavy image content.” Greg confirmed that the image ads aren’t displayed next text-only messages and they sometimes appear next to HTML messages that include a lot of images, especially newsletters.

Gmail’s image ads are contextually targeted, but it’s unlikely that users will tolerate them well. After all, one of Gmail’s selling points was that it only used relevant text ads. Here’s Google’s answer from 2005 to the question “What makes Gmail different?“: “There are other differences in the way Gmail provides access to your email. For example, Gmail automatically groups an email and the replies to it as a conversation. That means you always see a message in its proper context. And there are no pop-ups or banner ads in Gmail, just relevant text ads and links to related pages”. Google’s explanation continues: “[Gmail ads] are small and unobtrusive. They don’t fill half your screen and we don’t make you read them just to get to your inbox. Ads are never inserted into the body text of either incoming or outgoing Gmail messages and you won’t see any pop-ups or untargeted banner ads in Gmail.”

It’s interesting to see that a Gmail page about privacy explains that “showing relevant advertising offers more value to users than displaying random pop-ups or untargeted banner ads”. The key words are “random” and “untargeted”.

The Wall Street Journal got hold of a confidential Google document from 2008 about interest-based advertising, a feature that was released last year. In addition of providing ads that match the content of a page, Google wants to improve ad quality by creating user profiles based on the sites you’ve visited.

Selling ads is Google’s big money-maker, but the online-ad business is broadening away from Google’s sweet spot, selling ads tied to the search-engine terms people use. Instead, advertisers want to target people based on more specific personal information such as hobbies, income, illnesses or circles of friends. (…) Few online companies have the potential to know as much about its users as Google. (…) Significantly, however, Google doesn’t mix the separate pots of personal data. For instance, it doesn’t use data gleaned from a person’s Gmail account to target ads to that person elsewhere online.

Google’s internal document suggests that this might change. Google could use data from properties like Gmail, Orkut and even search queries to improve ad targeting. Here’s an extract from the document:

Over time, as the value of audience targeting is proven and the market reaction to these practices is realized, we will discuss the use of Search data. Google Search is the BEST source of user interests found on the Internet and would represent an immediate market differentiator with which no other player could compete. Search could be used to populate user interests. It can also be used to create new surround-search targeting options in which relevant display ads (or text ads) could be delivered on [Google Content Network] to a user within 15-60 minutes of a given search, whereby the timeliness of the ad would presumably increase its relevancy to the user.

It’s important to note that the author of the memo is Aitan Weinberg, a former DoubleClick executive who is now a senior Google product manager for interest-based advertising. WSJ says that Google’s executives were against using cookies to track people online, but the DoubleClick acquisition changed their perspective.

For the first time, Google had the ability to deliver ads targeted to individual people’s computers. But just because it had the ability, Google didn’t start using it. There was still too much internal resistance. (…) Tensions erupted during a meeting with about a dozen executives at Google’s Mountain View, Calif., headquarters about 18 months ago when Messrs. Page and Brin shouted at each other over how aggressively Google should move into targeting, according to a person who had knowledge of the meeting. (…) Mr. Brin was more reluctant than Mr. Page, this person said. Eventually, he acquiesced and plans for Google to sell ads targeted to people’s interests went ahead.

Despite the internal resistance, it’s tempting to cross-correlate data about users. Showing contextual ads in Gmail seemed creepy at first, but the ads turned out to be quite useful.

Google Maps has a new feature for business owners in the US: “for just $25 per month, businesses in select cities can make their listings stand out on Google.com and Google Maps with Tags“. Google allows businesses to add yellow markers on the map and to promote their websites.

The new Google Maps ads don’t influence ranking, but they make some of the results more visible. “Tags do not affect the rank of search results; they simply add more information when a particular user is searching,” explains Google. 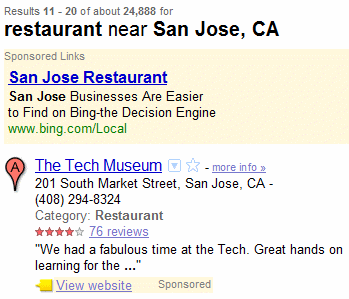 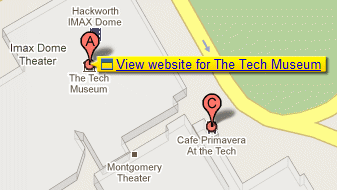 Until now, Google Maps ads were clearly separated from the organic search results, just like the ads from Google’s web search results pages. For only $25 a month, local businesses can now customize their snippets and add a distinctive marker on the map. This features makes the distinction from search results and ads blurrier.

Google doesn’t allow publishers to pay for advanced features like customizing snippets, adding rich snippets, showing thumbnails or favicons next to search results. “Google doesn’t accept payment to crawl a site more frequently, and we keep the search side of our business separate from our revenue-generating AdWords service,” mentions an article from Google’s help center for webmasters.

In other related news, Google Local Business Center is now known as Google Places and businesses from US, Japan and Australia can apply for a Google photo shoot. “Google’s photographers are specially trained to take great photos of building interiors, dealing with some of the challenges such as low lighting and tight spaces. The photographers are also trained to take panoramic pictures using fisheye and wide angle lenses that should translate into great looking pictures of your business.”