Google launched a site that shows a puzzle which can be solved using Google Search. “A Google a Day is a new daily puzzle that can be solved using your creativity and clever search skills on Google. Questions will be posted every day on agoogleaday.com and printed on weekdays above the New York Times crossword puzzle,” informs Google’s blog. Some may say it’s just a way to increase Google’s market share in the US, now that Bing is increasingly popular. Microsoft also used games to attract more users, so it’s not a new idea. Unlike Microsoft’s Club Bing, there’s no monetary incentive to solve Google’s puzzles. 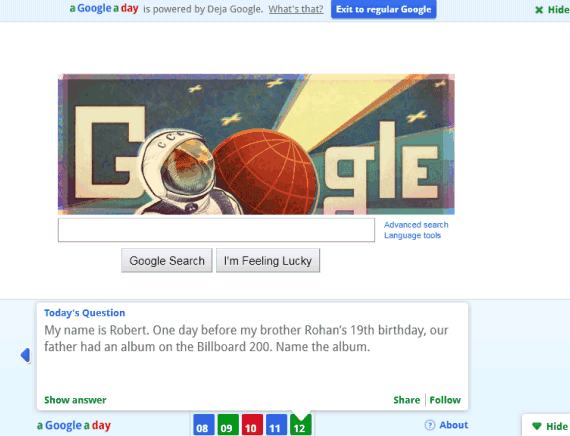 “A Google a Day” was created by Daniel Russell, a Googler who has a great blog about web search. “For the past several years I’ve been trying to put together some kind of game that would engage people in a playful way to learn how to search. After many trials, we FINALLY got one version of the Search Game out into the world! AGoogleADay.com is a simple game that poses a daily search puzzle for you to solve. The game starts today (Monday April 11, 2011) and will run for the next four weeks with each day’s puzzle getting harder from Monday through Friday. The secret agenda here is to get people to play around with search and to learn all they can do. I’ve felt for a while like Goggle gives people intergalactic hyperdrive starship capabilities, but most people only explore the shallows by paddling around with their shuttlecraft,” notes Daniel.

The most interesting thing about Google’s new site is that it uses an index called Deja Google which leaves out recent web pages. “To keep the game interesting for everyone, we created Deja Google – a wormhole inspired time machine that searches the Internet as it existed before the game began. Because nobody wants someone’s recent blog post about finding an answer spoiling their fun.”

Until Deja Google becomes a standalone service, you can use agoogleaday.com to remove recent pages from the results and to search Google’s index from April 5. You can also bookmark this URL: http://www.google.com/webhp?esrch=Agad::Public&nord=1.