Two weeks after the embarrassing launch, Gmail’s app for iPhone and iPad is back in the App Store. Google fixed a bug that broke one of the main features: notifications and that’s the reason why the app has been temporarily removed from the App Store.

Gmail’s “native” app is actually a wrapper for a new version of the Gmail web app, enhanced with a few features that integrate it with the operating system: basic push notifications, image upload and a new navigation menu. It’s interesting that the new interface of the mobile web app is only available if you use the “native” app. 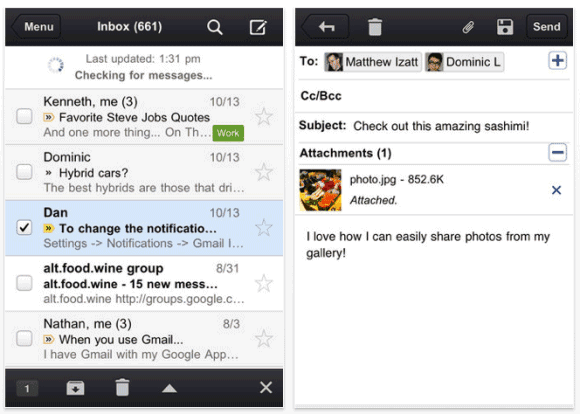 I’ve always thought that Gmail’s mobile web app is much better than the native Android app, so it’s a pleasant surprise to see that Google didn’t develop a completely new app for iOS. This way, you’ll always get the latest features and you don’t have to wait until Google releases a new version.

Regarding notifications, the app only supports badges and sound notifications, so you won’t see the banner notifications introduced in iOS 5. Hopefully, Google will address this issue in a future update.

“To try out the Gmail app today, install it from App Store on any iOS 4+ device. Those who already have the Gmail app released Nov 2 must uninstall or log out of the old app prior to installing the new app,” suggests Google.