Gmail added a long-awaited feature: making phone calls. If you install the voice and video chat plug-in, you can call phones in the US and Canada for free. You can also call in other countries, but you’ll have to pay. Fortunately, Google’s rates are really low and the service is cheaper than Skype.

“Calls to the U.S. and Canada will be free for at least the rest of the year and calls to other countries will be billed at our very low rates. We worked hard to make these rates really cheap with calls to the U.K., France, Germany, China, Japan — and many more countries — for as little as $0.02 per minute,” informs Google. 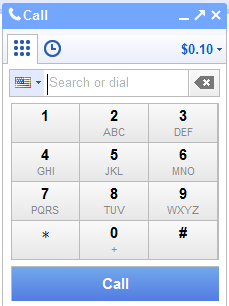 If you have a Google Voice phone number (anyone in the US can get one), you can also receive phone calls in Gmail. Now that Google Voice integrates with Gmail, a lot more people will use it.

To try the new feature, make sure that your Gmail interface language is set to English (US) and that the voice and video chat plug-in is installed. You get an initial calling credit ($0.10), but unfortunately you can only add credit if you’re in the US.