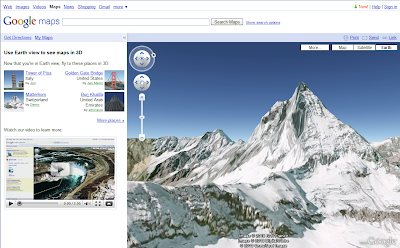 When we first launched Google Earth back in 2005, it revolutionized the world of digital mapping. In the years since, Earth has been getting faster and lighter while adding large amounts of imagery, more ambitious features and an ever-expanding roster of platforms, including support for Mac, Linux, iPhone, Android and even the 2011 Audi A8!

Web browsers haven’t exactly been standing still either. As their capacity to handle richer applications has steadily grown, our ability to bring Google Earth online has grown along with it. In 2008, we released the Google Earth Plugin to developers, and since then thousands of sites have used it to create many cool applications and even games. Now the time has come to take off the plugin’s online training wheels and roll it out on the main stage: Google Maps. So if you’re one of the hundreds of millions of people who use Maps worldwide, you can now explore the world in luxuriantly-detailed, data-rich 3D imagery and terrain from Google Earth. If you’ve already downloaded the Google Earth Plugin, you should be able to see Earth view in Maps right away. Otherwise, you can just install the Plugin to enjoy a Maps experience that includes angled Earth views, 3D buildings, smooth panning and zooming and a great introductory showcase of places to visit and things to see.

Current Google Earth users, of course, will continue to enjoy the full power of the standalone application: KML editing, historical imagery, GPS tracks, tour-creation, Mars, Sky, flight simulator and so on. But for quick online access, the power of 3D will also be available at the click of a[n Earth] button. We’re thrilled to be able to bring this functionality to the web and we invite you to come share the moment with us.