Fast, simple, secure, built for the Web, doesn’t require administration. It’s a Chromebook, a Chrome OS notebook that will be available starting from next month.

Google’s simplified computing model puts the browser at the core and creates an operating system that revolves around Google Chrome. Samsung and Acer are the launch partners. Samsung’s notebooks have 12.1″ displays, Atom Dual-Core processors, 16 GB solid state drives, weigh 1.48 kg and get 8.5 hours of continuous usage. They’re similar to the Acer notebooks, which have 11.6″ displays, a higher resolution, but only get 6 hours of usage. Some of the notebooks include 3G support, while other notebooks are Wi-Fi only. “The Samsung Chromebook will cost $429 in the U.S. for the Wi-Fi only version and $499 for the 3G version. Acer’s Wi-Fi only Chromebook will cost $349,” reports CNet.

Here’s one of the Samsung Chromebooks: 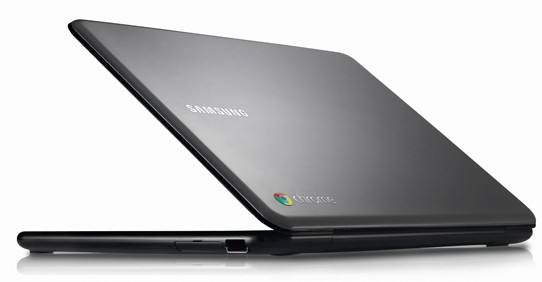 While Chromebooks don’t require administration, businesses and schools need a way to manage hundreds or thousands of notebooks, so Google decided to offer a service that includes a cloud management console, support, device warranties and regular hardware refreshes for only $20/user (schools) or $28/user (businesses).

Chromebooks are actually the real netbooks, lightweight and inexpensive computers built for simple tasks like browsing the Web. Unfortunately, netbooks are no longer very popular and users replace them with tablets like the iPad, which have better displays, better battery and are easier to use. For now, Chromebooks will compete with Windows netbooks and it won’t be easy to convince people to buy a Chrome netbook when they could run Chrome on a regular netbook. The good news is that Chromebooks will force Google to improve its web applications, to offer more advanced features, more free storage and all Google users will benefit even if they don’t buy a Chromebook.