Bloglines, one of the most popular web-based feed readers, will no longer be available after September 30th. InterActiveCorp, the company that acquired the service in 2005, also owns the search engine Ask.com.

When we originally acquired Bloglines in 2005, RSS was in its infancy. The concept of “push” versus “search” around information consumption had become very real, and we were bullish about the opportunity Bloglines presented for our users.    Flash forward to 2010. The Internet has undergone a major evolution. The real-time information RSS was so astute at delivering (primarily, blog feeds) is now gained through conversations, and consuming this information has become a social experience. As Steve Gillmor pointed out in TechCrunch last year, being locked in an RSS reader makes less and less sense to people as Twitter and Facebook dominate real-time information flow. Today RSS is the enabling technology – the infrastructure, the delivery system. RSS is a means to an end, not a consumer experience in and of itself. As a result, RSS aggregator usage has slowed significantly, and Bloglines isn’t the only service to feel the impact. The writing is on the wall. 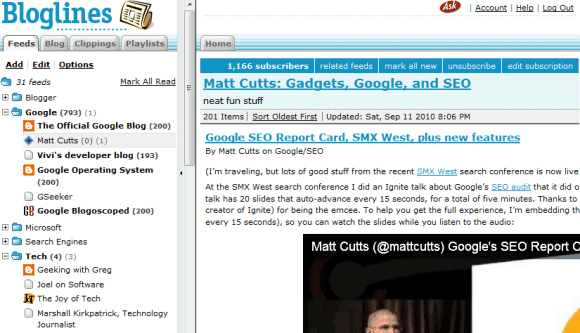 Most Bloglines users will probably migrate to Google Reader, which is now the most popular web-based feed reader. Unfortunately, Google Reader is still a niche service and this won’t change in the future, so Google will eventually discontinue it. Instead of subscribing to feeds, people prefer to subscribe to other people. Google Buzz, Google Me and other social services will use Google Reader’s back-end, while offering a people-centric experience. 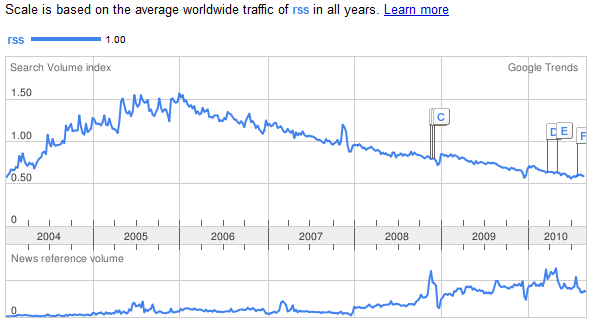