Google has accidentally made public a YouTube video that shows Android 3.0 in action. It’s a completely new interface for tablets that borrows a lot of ideas from BumpTop, the 3D desktop software acquired by Google last year. 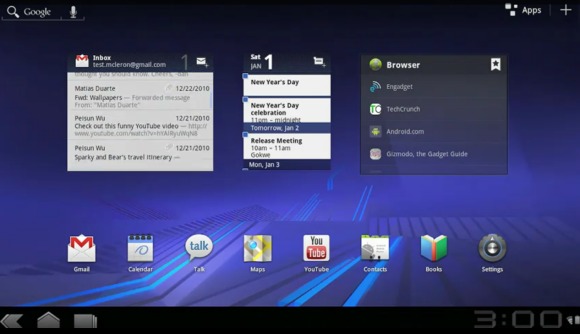 Engadget says that the new interface “looks more or less nothing like Android”. You might think it’s a new operating system. The video mentions that this is “the next generation of Android” and that’s built entirely for tablets.

It seems that the Android tablets that will be launched in the coming months will have impressive hardware and an updated operating system that looks stunning, so they’re poised for success.

Honeycomb is the next version of the Android platform, designed from the ground up for devices with larger screen sizes, particularly tablets. We’ve spent a lot of time refining the user experience in Honeycomb, and we’ve developed a brand new, truly virtual and holographic user interface. Many of Android’s existing features will really shine on Honeycomb: refined multi-tasking, elegant notifications, access to over 100,000 apps on Android Market, home screen customization with a new 3D experience and redesigned widgets that are richer and more interactive. We’ve also made some powerful upgrades to the web browser, including tabbed browsing, form auto-fill, syncing with your Google Chrome bookmarks, and incognito mode for private browsing.