If you click on Gmail’s “Help” link at the top of the page, you’ll be sent to an appropriate section from the Gmail Help Center. Instead of always linking to the help center’s homepage, Gmail links to the priority inbox section if you’re using Gmail’s smarter inbox, it shows the articles about filters if you’re trying to create a filter and the articles about contacts if you’re using Gmail’s contact manager. 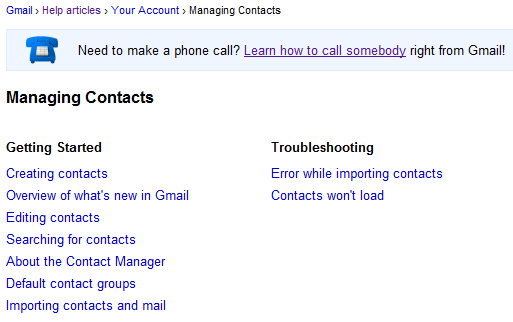 It’s a small change that makes it easy to find useful information about the Gmail feature you’re currently without having to type a query. Hopefully, Google will add this feature to other services, just like the interactive bug reporting tool, which is now available in Gmail, YouTube and AdSense.

Google revealed an important secret: the revenue shares for two AdSense services. Until now, publishers didn’t know the percentage of the revenue that is paid by Google.

It’s interesting to note that the revenue share for AdSense for content has never changed since the service was launched, back in 2003.

Sevices like Google Search, AdWords and AdSense are usually treated as black boxes, since Google rarely reveals specific information about its algorithms.

Google AdSense’s help center still says that “each AdSense publisher receives a percentage of the cost an advertiser pays for user clicks or impressions on their ad. This percentage is referred to as the revenue share. Google does not disclose the revenue share for AdSense.”

Google’s financial results for the first quarter of this year, show that only 30% of Google’s total revenue is from partner sites and the traffic acquisition cost (TAC) is 26% of the revenue. “The majority of TAC is related to amounts ultimately paid to our AdSense partners, which totaled $1.45 billion in the first quarter of 2010.” Google’s partner sites generated revenues, through AdSense, of $2.04 billion. Obviously, 1.45/2.04~=0.71, which is very close to the AdSense for Content revenue share.