Tswana is a Bantu language spoken by the largest ethnic group in what landlocked country?

The production of yerbe maté, a tea made from an evergreen plant, is important to the economy of Misiones. This province is located in which country that borders Paraguay?

The Øresund Bridge, opened in 2000, connects Copenhagen, Denmark with what Swedish city?

The largest city in northern Haiti was renamed following Haiti’s independence from France. What is the present-day name of this city?

Aadith Moorthy tackled these and other questions to win this year’s National Geographic Bee held today in Washington, D.C. While he missed his first question of the day, he didn’t let that get get in his way. His win is the culmination of many months of preparation and local competitions that began last fall at schools across the country.

Aadith is a 13-year-old 8th grader from Palm Harbor, Florida and attends the Palm Land Middle School. When not studying geography, he is a South Indian classical (Carnatic) music concert singer. At the beginning of the final round, he gave the audience a taste of his talent when Alex Trebek, the host of the Bee, asked him to sing on the spot.

We’re proud that Google is this year’s sponsor of the National Geographic Bee. This contest exemplifies the importance of being geographically literate and showcases just how well these students understand the world around them. This skill-set will be a vital asset as they continue their education and careers. As you can tell from the questions above, it’s not just a matter of memorizing state and country capitals!

I had the great opportunity to speak at both the preliminary and championship rounds of the Bee and was impressed by the dedication of the teachers who made special efforts to train their school finalists and the depth of knowledge of the students. This is contest with important implications for their future lives and careers.

We’re excited to follow all of the 54 finalists to see where in the world they land. 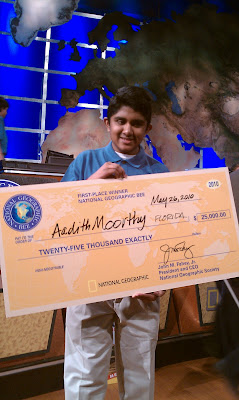