Last year, Google launched Ocean in Google Earth, expanding the scope of Earth to include 3D maps of the world’s oceans and videos, photos and narrative from the world’s leading scientists and media sources to bring them to life. We worked with more than 100 partners to begin to fill in the “blue” part of the planet, adding hundreds of placemarks in more than 20 ocean layers. Since then, we’ve added hundreds of new posts to the Ocean layer with the help of Sylvia Earle’s Mission Blue Foundation and dozens of committed individuals around the world. The posts come from a diverse range of partners including National Geographic, independent videographers and dive enthusiasts, government organizations like the National Oceanographic and Atmospheric Administration (NOAA) and international organizations like the International Union for Conservation of Nature (IUCN).

Today, the layer will become part of the default set of annotations seen by all Earth users. Although a humble step given the dearth of information available about these vast expanses of geography, we are happy to take one more step to make the oceans a first-class part of Google Earth and to give them at least a starter portion of the thick soup of photos and places that describe the land part of the planet. One of the greatest things about Earth is that it allows everyone to see and experience the fullness of their planet, from revisiting places they know well to venturing out to formerly unknown mountain peaks, desert vistas, and increasingly, the blue heart of life on Earth. As Sylvia has said of the Ocean on many occasions, “With knowing comes caring, and with caring there’s hope.”

Soon after last year’s launch, Sylvia asked attendees at the TED conference to help her realize a wish: to create a series of marine protected areas she calls Hope Spots. Sylvia and a group of influential thinkers are now on a Mission Blue Voyage to the Galapagos Islands to brainstorm how they might best achieve better ocean protection. You can follow them on their journey by visiting the the Mission Blue Foundation website and on Twitter at @MissionBlue. There you can learn more about the launch of their Hope Spots initiative and visit all 18 of these spots using the Google Earth plugin. 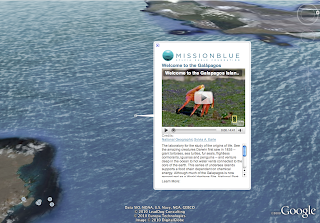 We’ve also created a narrated tour featured in the Ocean Showcase to introduce you to eight of the regions proposed for protection: the Eastern Pacific Seascape including the Galapagos Islands, the Gulf of California, the Mesoamerican Reef in the Caribbean including Belize, the Sargasso Sea in the mid-Atlantic, the Chagos Archipelago in the Indian Ocean, the Coral Triangle, the Ross Sea in the Antarctic and Gakkel Ridge in the Arctic.

We’d also like to take a moment to thank the partners who have helped us improve our 3D canvas of the world’s oceans in the past year: NOAA (global coverage), MBARI (Monterey Bay Canyon), The California State University at Monterey Bay (California Coast), The Center for Coastal and Ocean Mapping – Joint Hydrographic Center at the University of New Hampshire (Arctic) and The Living Oceans Society (British Columbia and Canada).

As Earth Day approaches, we hope you’ll take a little time to explore the planet, including the blue part.