Google Maps Navigation for Android is now available for Canada, Austria, Belgium, Denmark, France, Germany, Italy, the Netherlands, Portugal, Spain, and Switzerland, in addition to the 3 countries that were already supported: US, UK and Ireland. It’s interesting to notice that Google still uses data from Tele Atlas for all the countries supported by Google Maps Navigation, except for the US and Canada. 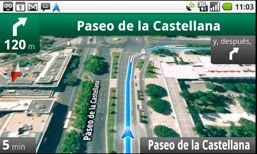 Free turn-by-turn navigation could be an important reason why people choose a mobile phone, so Google and Nokia try to make the most of Google Maps Navigation for Android and Ovi Maps for Symbian. Most likely, in the near future, all smartphones will include a free application for navigation.

In other related news, Google Search by Voice is now available for German, Italian, Spanish and French. Search by voice is an important feature of the Quick Search Box app for Android, Google Mobile App for iPhone and Blackberry. The nice thing is that you don’t have to download an update for none of the applications, as the new languages are automatically recognized.