Google Maps Navigation, the Android application that offers turn-by-turn directions for free, is now available for the UK and Ireland. “Like other satnav devices, Navigation includes 3D views, turn-by-turn voice guidance, and automatic rerouting. But because Google Maps Navigation is connected to the Internet, it also features powerful functionality you can’t get from other satnav services, including the most up to date map, business, and traffic data, access to satellite and street views, and of course, search,” explains Google.

Google’s application could add all the countries available in Google Maps, but the licensing terms don’t allow Google to show satellite imagery or driving directions in a real-time navigation application. Last year, Google started to use its own mapping data in the US and it’s likely that it will do the same for other countries.

Until Google adds more countries to the application, a developer managed to create Google Maps Brut, a modified version of Google Maps Navigation that supports most countries. Even if Google Maps Brut breaks Google’s terms, you can try it by installing Nav Launhcer from the Android Market. 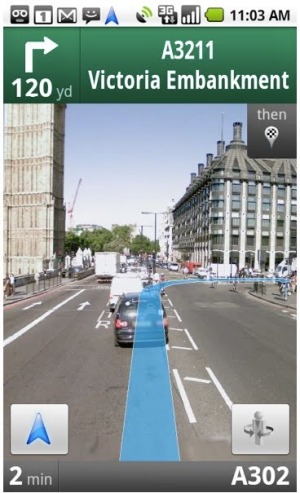 Google Maps Navigation requires Android OS 1.6+ and comes included as a part of Google Maps for Android v3.2 and higher. To update the software, Google suggests to search for [Google Maps] in the Android Market.