All of you haiku fans (like many of us on the Chrome team) can stop here; the rest can read on for more details.

A year ago we introduced a new model of computing with the launch of Chromebooks. We’ve heard from many of you who’ve enjoyed the speed, simplicity and security of your Chromebooks at home, at school or at work. (Thanks for all the wonderful feedback and stories!) Today, we wanted to share some developments with you—new hardware, a major software update and many more robust apps—as we continue on our journey to make computers much better.

Next-generation devices
Our partner Samsung has just announced a new Chromebook and the industry’s first Chromebox. Like its predecessor, the newest Chromebook is a fast and portable laptop for everyday users. The Chromebox is a compact, powerful and versatile desktop perfect for the home or office. 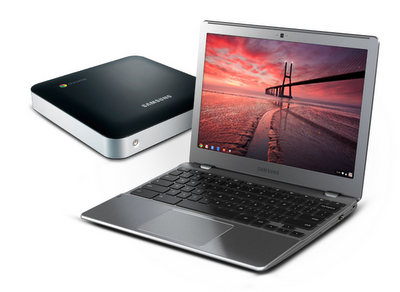 Speed
Speed is integral to the Chrome experience. The new Chromebook and Chromebox, based on Intel Core processors, are nearly three times as fast as the first-generation Chromebooks. And support for hardware-accelerated graphics, a built-from-scratch multi-touch trackpad and an open-source firmware stack provide a much faster and more responsive computing experience. The new Chromebook boots in less than seven seconds and resumes instantly. With the Chromebox, you can be on a video conference while continuing to play your favorite role-playing game on the side.

An app-centric user interface
With the new user interface you can easily find and launch apps, and use them alongside your browser or other apps. You can pin commonly-used apps for quick access, display multiple windows side-by-side or experience your favorite apps in full-screen mode without any distractions. 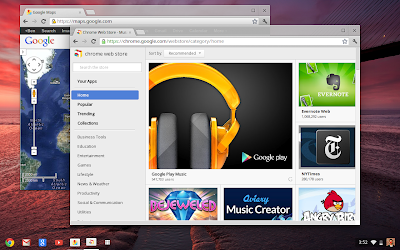 Be much more productive…or not

The (always) new computer
We’ve released eight stable updates over the past year, adding a number of major features and hundreds of improvements to all Chromebooks through our seamless auto-update mechanism. There’s a lot more on the way, so all you need to do is sit back and enjoy the benefits of the (always) new computer.

For those who want to try the Chromebook and Chromebox first-hand, we’re expanding the Chrome Zone experience centers. In the U.S., Chromebooks will be available to try out in select Best Buy stores in the coming weeks. In the U.K., they’re now available in a growing list of PC World and Currys stores.

Starting today, you can get the new Chromebook and Chromebox from our online retail partners in the U.S. and U.K., and in other select countries over the coming weeks.

(Cross-posted from the Chrome Blog)