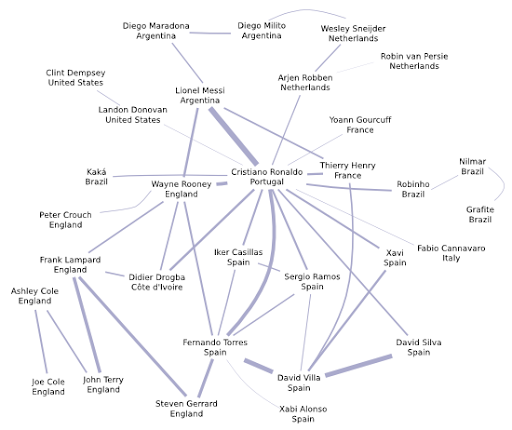 Why are some players connected while others aren’t? Here are some of our discoveries:

The world’s most popular players are well-connected. The highest paid footballer Cristiano Ronaldo (Portugal) is tightly connected to other popular players including Lionel Messi (Argentina), Fernando Torres (Spain), Wayne Rooney (England) and Didier Drogba (Côte d’Ivoire). These players form a nucleus connecting all the other players.

A country’s players are usually connected—but not always. For example, Arjen Robben connects all the Netherlands players. In contrast, Ronaldo connects Brazilian player Kaká to his teammates Robinho, Nilmar and Grafite. France’s players Thierry Henry and Yoann Gourcuff are likewise connected through Ronaldo.

Players in the same football club are connected. Didier Drogba and Frank Lampard play together on Chelsea but represent Côte d’Ivoire and England in the World Cup. Similarly, Steven Gerrard (England) and Fernando Torres (Spain) both play for Liverpool.

If you’re interested in exploring how players connect to each other, try searching for a player’s name using Google Insights for Search and look at the “Top searches” in the bottom left to see if other footballers are listed. For example, Clint Dempsey, the U.S. player who made the match-tying goal against England last Saturday, is connected to Landon Donovan.