As a former professional cyclist, nothing beats the thrill of being in the peloton and racing towards the finish line. Although I’ve traded in my cycling career for life as a Googler, I’m still a fan and enjoy watching my former teammates and friends battle in races like the Tour de France, which started on Saturday. While the cyclists were preparing to tackle the pave of Arrenberg and the Cols in the Alps, I got to thinking about ways that we can bring that experience to the hundreds of millions of fans who will be following the Tour de France over the next few weeks. Google is home to many other cycling enthusiasts, so we got together to work on ways to build a My Tracks-based gadget that will allow all the other fans to follow the action like never before.

The My Tracks application for Android phones lets you record and share your own outdoor activities, and now Team HTC-Columbia will use a special version of the app with SRM to transmit their telemetry and location in real-time as they make their way through the 3,642 kilometers of the Tour de France. The nine riders (sadly, now eight, as Adam Hanson was injured on Sunday) on Team HTC-Columbia are carrying HTC Legend phones with ANT+ that use My Tracks to capture their location along with their power, heart rate, cadence and speed. On www.google.com/mytrackstour, you’ll see a Google Map showing the team members’ location on the course and a detailed telemetry report. You can observe how Michael Rogers’ heart rate spikes as he attacks the climbs in the Alps on Stage 9, see how many watts Mark Cavendish puts out in the sprint on the famous sprinters’ stage into Bordeaux, and see just how fast riders climb the famous Col du Tourmalet. 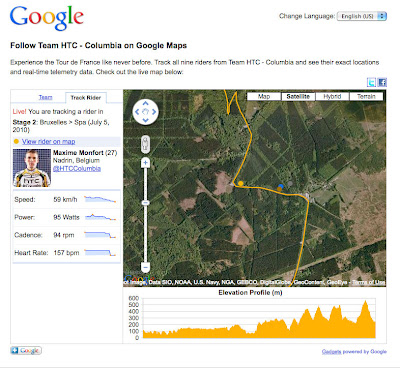 From the image above, you can see how Maxime Monfort took the lead during Stage 2 between Bruxelles and Spa yesterday. Right now, the riders are racing in Stage 3, which takes them across the border into France and you can follow all the latest action on our website or directly on your own iGoogle page.

The team also built a map gadget that is available for you to embed on your own website or blog. We’re also publishing an API that any web developer or broadcaster can use to build their own custom application or use to enhance the live television coverage. I’m excited about the potential for web developers and broadcasters to make use of the API and data in creative ways to help all the Tour de France followers (myself included!) get even closer to the action.

This project was the work of many Googlers in their 20% time, and as cycling fans ourselves, we’re happy to be able to share it with the world. We hope you enjoy this unique way of following Team HTC-Columbia over the next few weeks.