Three years ago, when Google launched Chrome many people wondered if it will be successful. Chrome became a very popular browser, with more than 160 million active users, but its most important achievement was accelerating the development of all the other browsers and shifting their priorities from adding UI features to removing clutter, making them faster and better suited for running Web apps. Internet Explorer embraced HTML5, Firefox started to update more often, Opera simplified its interface. Google started from the scratch and created a browser for today’s Web apps. 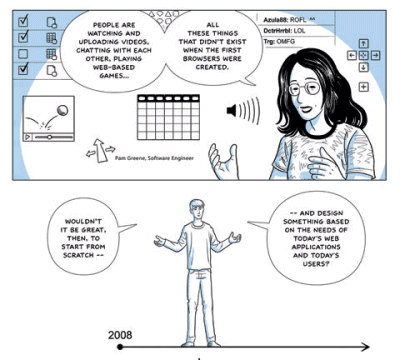 For some, Chrome OS may seem pointless. Why buy a notebook that can only run a single program, when you can install Chrome on your existing computer? But why switch from Firefox to a browser that doesn’t support advanced extensions? After all, Firefox is a lot more customizable than Chrome since any extension can dramatically alter the interface and integrate with the browser. It turns out that Firefox extensions can sometimes slow down the browser, some use a lot of resources, they’re difficult to update and every new major release can break them. Chrome’s extensions are less powerful, but they don’t slow down the browser, they’re easier to develop and to maintain and major new releases rarely break them.

Just like Chrome influenced all the other important browsers, Chrome OS will change the other operating systems. Sandboxing applications can make the operating system a lot more secure, saving your settings and files online allows you to use them from any other computer, Web applications are powerful enough to replace some of the native apps and they don’t live on your computer, so they can be constantly updated. Even Windows intends to switch to “Web-powered apps built using HTML5 and JavaScript that have access to the full power of the PC” in the next major release, while still supporting “legacy” apps. It’s obvious that most of the apps will eventually migrate to the Web and Chrome OS is better suited to support them because it doesn’t have to worry about legacy apps and because it’s designed just like a Google Web app: constantly updated, fast, clutter-free. “The future is already here – it’s just not evenly distributed,” said William Gibson. Chrome OS is ready… when you are.

{ image from the Chrome Comic Book, licensed by Google as Creative Commons }