App Inventor is a Google software that allows anyone to develop simple Android apps. “To use App Inventor, you do not need to be a developer. App Inventor requires NO programming knowledge. This is because instead of writing code, you visually design the way the app looks and use blocks to specify the app’s behavior.”

App Inventor lets you create applications that use advanced features like GPS or sending SMS messages. “You can build an app to help you remember where you parked your car, an app that shows the location of your friends or colleagues at a concert or conference, or your own custom tour app of your school, workplace, or a museum.”

Google says that the software has been successfully tested in several schools across the US. “App Inventor for Android gives everyone, regardless of programming experience, the opportunity to control and reshape their communication experience. We’ve observed people take pride in becoming creators of mobile technology and not just consumers of it,” says Google’s Mark Friedman. 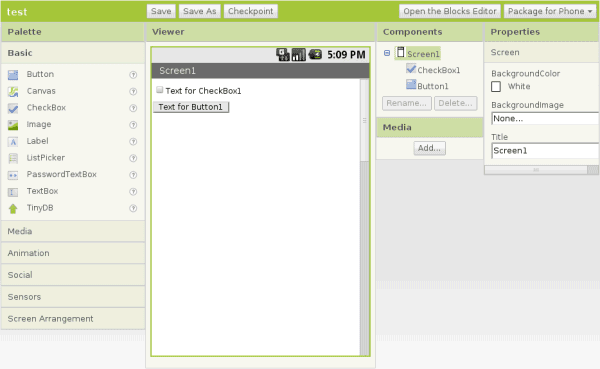 “The App Inventor project is led by MIT computer scientist Harold Abelson, the founding director of the Free Software Foundation, Public Knowledge, and the Creative Commons who’s now on sabbatical at Google,” reports the Register.

“The Google project, Mr. Abelson said, is intended to give users, especially young people, a simple tool to let them tinker with smartphone software, much as people have done with computers. Over the years, he noted, simplified programming tools like Basic, Logo and Scratch have opened the door to innovations of all kinds. Microsoft’s first product, for example, was a version of Basic, pared down to run on personal computers. The Google application tool for Android enables people to drag and drop blocks of code — shown as graphic images and representing different smartphone capabilities — and put them together, similar to snapping together Lego blocks. The result is an application on that person’s smartphone,” notes the New York Times.

App Inventor is especially suitable for Android because Android apps are collections of reusable intents. Even if you build a simple application, you can easily make it more powerful by using components from other applications.