If you search for [google chrome], you’ll notice that Chrome’s homepage is no longer the top search result. 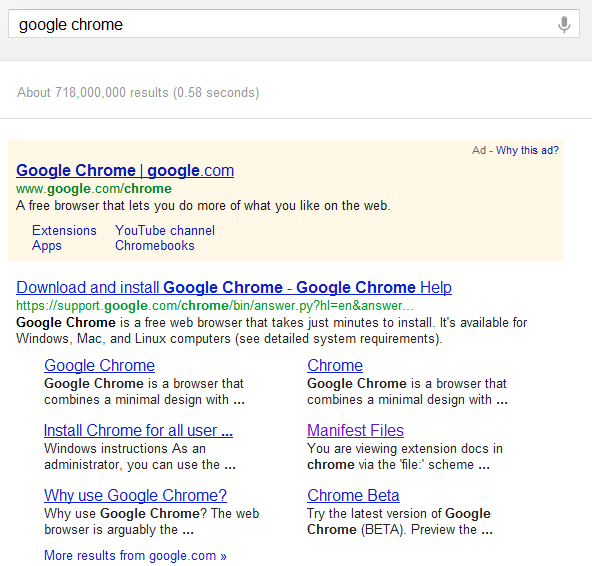 The explanation is that a video ad for Chrome was used in a lot of blog posts that promoted Chrome and one of the posts linked to Chrome’s homepage without using the nofollow attribute.

“Buying or selling links that pass PageRank is in violation of Google’s Webmaster Guidelines and can negatively impact a site’s ranking in search results,” explains a Google article.

Even though Google didn’t actually buy links, it’s strange to see that a Google Chrome campaign generated a lot of low-quality posts. Danny Sullivan says that “the bigger issue in this has always been the garbage content that was produced by the campaign, ‘thin’ material that Google has fought to keep out of its own search results. I’m still trying to understand how Google failed to understand that the marketing companies it engaged with would produce this.” Actually, the whole story is difficult to understand. “Google seems to have contracted with Essence Digital to have a video ad campaign be run across the web. Apparently, Google had no idea how Essence Digital was going to actually run the campaign or make the video ads appear across the web.”

A Google spokesperson says that the campaign wasn’t authorized by Google, but “Google should be held to a higher standard, so we have taken stricter action than we would against a typical site”. That’s the reason why Google “demoted www.google.com/chrome and lowered the site’s PageRank for a period of at least 60 days”. As Matt Cutts explains, “after that, someone on the Chrome side can submit a reconsideration request documenting their clean-up just like any other company would. During the 60 days, the PageRank of www.google.com/chrome will also be lowered to reflect the fact that we also won’t trust outgoing links from that page.”

Google already uses text ads for Chrome, sitelinks still point to the demoted page and the top result for [google chrome] is a Google page, so users will manage to find Chrome’s homepage, but it’s impressive to see that Google penalized one of the most important Google products because of a small mistake. After all, the videos used a DoubleClick redirect to link to Chrome’s homepage and only one of the posts linked directly to the page. That post has been removed by the blog author, so Google could have claimed that there were no paid links.

In 2009, Google Japan hired an Internet marketing company to promote one of its features. The company used paid posts and Google dropped the PageRank for Google Japan’s homepage from 9 to 5.