Gmail’s fictional characters are now at Facebook. Someone spotted Caitlin Roran and Nathaniel Woodward in Facebook’s privacy page. Go to Facebook privacy settings, then choose “Custom” and click “Customize settings.” Under “Include me in ‘People Here Now’ after I check in,” click “See an example.” You should see some of your friends, plus Caitlin Roran and Nathaniel Woodward. 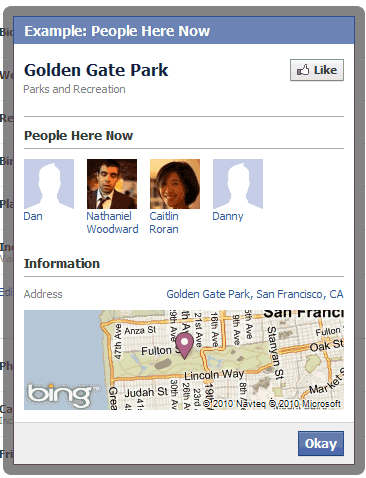 It’s worth pointing out that Paul Buchheit, the ex-Googler who created Gmail, is now a Facebook employee and he’s not the only former Gmail engineer who works at Facebook. According to Christopher Harley, Caitlin Roran is a fictitious name used by Ana Yang, while Nathan Woodward borrowed Casey Muller‘s photo. Ana Yang and Casey Muller got married last year.

“Ms. Yang and Mr. Muller met in May 2008 while working at FriendFeed, a startup social networking Web site in Mountain View, Calif. ‘I was the first employee hired,’ said Ms. Yang, who enjoyed being part of the hard-working, fun-loving group. They spent 10 to 12 hours at desks in a cavernous work space in which they also rode bicycles and played Ping-Pong. She loved sports, yet her colleagues, though all male, were not big fans. Then Mr. Muller joined the company, which was sold to Facebook in August, and told her how much he liked basketball.”

Don’t miss this brilliant story about Caitlin Roran found in a Wikipedia page that has been deleted.